Legendary musician Irene Mawela believes her latest accomplishment will inspire her to continue with her journey in the music business. The veteran musician recently received an honorary doctorate in music from the University of Pretoria.

She said that her journey was not easy but worth rewarding.

With a remarkable career spanning over six decades, this singer, songwriter and composer is one of the artists who paved the way for Tshivenda music in commercial markets.

“When I started, we were young and I didn’t know anything about recording, but I enjoyed listening to my voice,” she said. Mawela, from Muraleni village in Sinthumule area, was spotted by Rupert Bopape when she was only 17 years old. At the time, she was in a group called Sweet Voices, performing at wedding ceremonies in Soweto. “They asked my parents, who agreed that I join the group,” she said.

She joined a group known as the Dark City Sisters, and most of her music was recorded in isiZulu, IsiXhosa and Sesotho.

Although she had a burning desire to sing in her mother tongue, the company executives restricted this language, insisting that popular music needed to be recorded in languages that would attract buyers.

“That didn’t stop me. I ended up recording one song, entitled Nne nisongo Kolela, meaning ‘do not undermine me’ in Tshivenda, at the SABC studios,” she said. The song was recorded before the inception of Radio Venda, but was played on Radio Lebowa, now Thobela FM, and other radio stations.

After it received an overwhelming response, people started asking for the song to be played more by writing letters to the radio stations as it was done back then.

Mawela then became the first Tshivenda musician to sign a record deal with a commercial label. She joined the Mavuthela Music Company - a subsidiary of Gallo, which was active from the mid-1960s to the late 1980s. “Back then, artists or groups were not allowed to record more than one album in a year in one language,” she said. This worked to her advantage as she was singing in four languages and this allowed her to produce for four groups in one year.

She said she worked under different names while composing and producing for several groups. Among others, she worked with groups such as Walter and the Beggars, Mahottela Queens, and Izintombi Ze Moya.

Since then, many Tshivenda musicians have followed her. She had also been honoured with a lifetime achievement award at the Tshivenda Music Awards in 2012.

Mawela said her doctorate would influence her to continue with her journey and advised that young people in the industry should not give up on their dreams.

“Take your language to the people. When you work hard and commit yourself, you will get results. I will continue to work even harder. This just shows me that there are those who see and recognize what I am doing,” said Mawela. 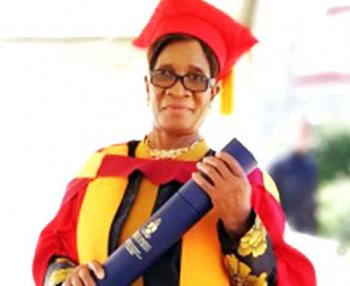