Mutale residents demand their municipality back

Service delivery has become a burning issue in most areas of the country.

Prior to the recent national elections, many communities embarked on violent protests, citing lack of service delivery as the main cause.

One of the worst affected area is Mutale outside Thohoyandou. The area, which was dissolved in 2016 and incorporated into Thulamela and Musina municipality under the new municipal boundaries, has been one area where residents have been complaining about no services.

Since their incorporation into Thulamela, residents say things have gone from bad to worse with basic services such as water not available. This has angered the community so much that they now want their old municipality back.

Residents and different structures, among them the Mutale Concerned Group, are now rallying together and are speaking in one voice that the government should either give them the service they need or take them back to their municipality, Mutale.

Mr Benedict Nalana of the group said their situation was as if they had been taken from Israel to Egypt where life was becoming more difficult by the day. He added that they had been in constant interaction with the municipality complaining about basic services such as water and simple gravel roads, but nothing had come out of those meetings.

"We are on the receiving end here. We are suffering, and no one seems to care. Ever since our area was taken over by Thulamela, nothing good has happened and poor service has become part of our lives. Nepotism when it comes to employment continues to be a heartache to many and the recent protests in the area are a clear indication that people are not happy here," said Nalana.

He further indicated that their municipality was wrongly dissolved without consulting the residents, as the consultative forums had been held far away in Thulamela where residents of Mutale could not even afford to travel to.

"We want our municipality back. It was better under Mutale, and today many cannot even have cars as roads are very bad and are eroded everywhere. If the government does not take us back, we will be left with no option but to make the area ungovernable," said Nalana.

COGHSTA MEC Jerry Ndou made it clear to the communities that the government does not have the power to change boundaries, but the municipal demarcation board can. He advised communities to wait for a new boundaries window to open and submit their submissions, which will be considered in 2021. 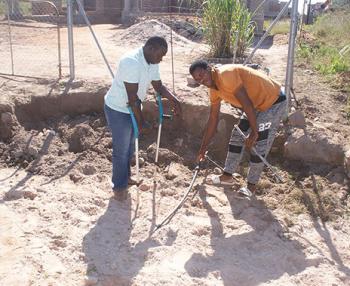 Residents inspect a washed out water pipe at the entrance of one of the residences at Tshilamba. Residents say they have been waiting for the municipality to gravel the street since the February rains.

Streets are in such bad shape that house owners are not able to bring their vehicles home.