It took him 17 full years to complete his junior degree and when he finally graduated last week, he became the talk of the town.

The 38-year-old Ndivhuho Muthivhi of Thohoyandou, thought by many students to be a university staff member, received his degree in international relations during the university's graduation ceremony on Thursday.

During the ceremony, 3 066 students received certificates, degrees and diplomas.

The never-say-die man registered at Univen in 2002 and only completed his degree in 2018. A mammoth function to celebrate his achievement was held at Sibasa over the weekend.

Among the guests was well-known musician Mr Obedience Nekhofhe, better known as Stapura in music circles. The musician composed a beautiful song "Pfunzo Ndi Ifa Muthivhi" (loosely translated as "education is an inheritance that will accompany the holder to the grave"), praising Muthivhi.

The song, which has since gone viral on social media, was performed for the first time during Muthivhi's graduation celebration over the weekend. It was played repeatedly as guests could not get enough of it.

Nekhofhe, who made a name for himself after releasing big hits such as Body Yawe and Uri ndi Mupombele, said he heard of Muthivhi's achievement and decided to compose a song praising him for his determination.

"A period of 17 years is not child's play. Not many can have such determination, but this man had a dream that one day he would achieve his goal of having a degree, which he did. This is my way of showing respect and celebrating his achievement," he said.

Muthivhi told those gathered that, after failing many times because of many non-academic activities, he dropped out in 2010 to concentrate on business. Only in 2014 did he go back to Univen full time and completed his degree in 2018.

"I am a living testimony that, no matter how long it takes, with determination, one will reach one's destination. I am a motivation to those who dropped out that, if they go back to the drawing board, nothing is impossible," he said.

He says he would soon be registering for his honours degree and aimed to have a doctorate in some years to come. 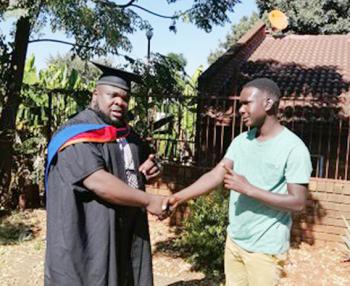