The wedding was different, the kind never seen before at Dididi and surrounding villages. The sight of a helicopter hovering above the village and later landing in the village was something unheard of.

This was the wedding ceremony of Mr Tshifhiwa Carlton Mabuduga, the groom from Tshisahulu village, and his bride, Ms Tondani Ramano of Dididi village, on Saturday.

The two celebrated their union during an exquisite, lavish ceremony held at The Richards Country Club in Itsani. Among the esteemed guests was well-known businessman David Mureri of Reri’s Insurance Brokers, whose luxury Mercedes was used to transport the new couple to the hotel.

The bride and her father were transported from home to the wedding venue in a chartered helicopter. The villagers were extremely joyous to witness such a memorable event.

After the wedding ceremony, the newlyweds were taken for a helicopter tour around Tshisahulu.

A resident, Mr Elphus Mudau, said he had never seen anything like that in their area. "This is something that will never be forgotten in this area. Most of us had never seen a helicopter at close range.”

The bride, Tondani, said that it had taken them four months to prepare for their great day. "We wanted to do things differently and we hope many young people were highly inspired and that there is still hope in marriage. We are happy it went well and according to our expectations," she said. 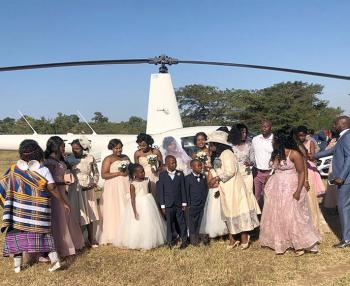 The newlyweds and their immediate families during the wedding. The helicopter used to transport the couple is in the background.

The newlywed couple during the wedding ceremony at Itsani.