The Minister of Police is facing yet another claim for damages, following an incident in Musina where a resident alleges that he was shot at and assaulted by members of the local police.

The incident allegedly happened at about 03:00 on 18 May this year when a senior engineer at Venetia Mine, Mr Pronounce Muleya, was driving along the town’s main street. Near Elegant garage, when he passed the stop street, a police vehicle allegedly moved in next to him and an occupant started shooting at him.

According to Muleya’s lawyer, Mr Hennie Erwee, his client was frightened and sped away but stopped at the Musina Mall. At that stage his vehicle was damaged with several bullets entering the car, but he was fortunately not hit by any of the bullets.

The police allegedly told Muleya that they thought that he was smuggling weapons. When he asked them why they just indiscriminately opened fire on civilians, Mr Muleya claims he was assaulted by the police officers. He claims he was slapped, hit with a fist, strangled and eventually locked up. The police apparently laid charges of assault against him. These charges were dropped when he appeared in court.

“We have instructions to continue with a claim for damages to the vehicle, assault and unlawful arrest against the Minister of Police and the members of the SAPS involved,” Erwee said.

The police’s provincial spokesperson, Col Moatshe Ngoepe, was asked about the incident, but could not shed much light. “I can't find the incident, but the complainant can take the matter to the IPID (Independent Police Investigation Directorate),” he said. 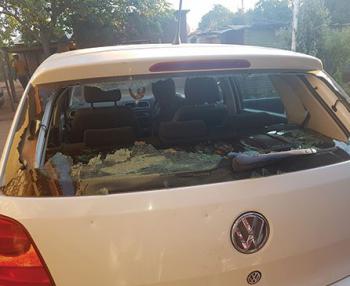 The Volkswagen Polo of Mr Pronounce Muleya with the shattered rear window.