Teaching under the trees

Almost 12 years have gone by since the community of Tshiungani village was promised new classrooms for Lwathudwa Secondary School.

The school was established in 2001, with four classrooms only, starting from Grade 8 to 10. In 2003, the school accepted its first Grade 11s, and the next year some Grade 12s. However, no classrooms were provided, which resulted in some classes’ being conducted under the trees.

The school governing body (SGB) of the school has been submitting requests for more classrooms since then, with no success.

“The department gave us four mobile classrooms in 2009 as a temporary solution to our problems.  They promised that we would get classrooms in the following year. Since then, the department has been making empty promises that have not materialized until today,” said SGB chairperson Mr Nkhetheni Tshibalo.

“In 2018, we communicated with the department telephonically, at which time we were given empty promises. Early February this year, we went to Polokwane where we met Ms Maswanganyi, whom we were referred to because Mr Senyatsi, the director for infrastructure, was not available.”

He added that she showed them a file “which proved that our school will be built in the 2019/20 budget with 14 classrooms, an admin block, 24 toilets and nutrition centre”. Tshibalo said that they went back to Polokwane on 25 February and met Mr Senyatsi, who made the same promise that Ms Maswanganyi had made.

“We requested nine mobile classes, so that our pupils can be accommodated while they are busy building new classrooms. Unfortunately, this promise was not fulfilled. We called him to make an appointment, but he said he was not in the office on that day. But when we arrived at their offices, we met Mr Senyatsi in the parking bay, where he said he was in a hurry and referred us to Ndebele.”

He added that they were then assured that they would get the classrooms in the first week of May. “He said they were modern mobile classes with air conditioning.”  Tshibalo said that they agreed with the arrangement, “but when we asked about new classrooms, he said we would get them in 2020/21.  He said the only thing we could get in this financial year were toilets.”

Tshibalo said that they went back to Polokwane on 21 June and that they were informed that an order for the classes had been placed “and they were going to be delivered before the school re-opens. Unfortunately, we have not received these classes until today”.

The school has an enrolment of 669 pupils. Tshibalo said the lack of classrooms was impacting negatively on the matric results.  “Overcrowding in classrooms is making it difficult for educators to teach more effectively.  Pupils cannot concentrate fully during outside classes under the trees as they are easily distracted by movements of cars and anything passing by.”

He added that their concern was that the government only seemed to listen to people who resorted to destroying public property while engaging in protest marches.  “As people who live in far-flung rural areas, we know the importance of the little resources we have.  We are also aware the future of our children relies on education.” 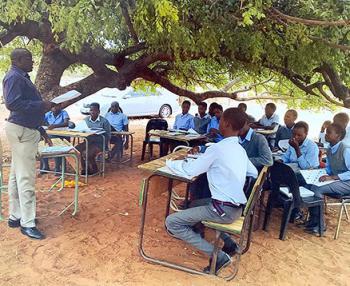 Trees are also used as classrooms.