Patients are disgruntled about bad treatment at hospital

Several patients who have been visiting the Louis Trichardt Memorial Hospital are not happy with the service and bad treatment that they continue to receive from the hospital.

Last week, Limpopo Mirror received several phone calls from enraged patients who complained that they had been in the queue “from as early as 06:00 and that it had now become 10:00”. They added that some guardians had brought their ailing children and that they had to sit on the benches for six hours before they could see a doctor.

A resident of Tshikota, who could not be named to protect her from victimisation, said that she had arrived at the hospital at 07:00 and gone into the file-collection queue. “By 10:49, all officers in the administration walked out of the office to allow a female cleaner to clean the office,” she said. “The cleaning took more than an hour and we all got enraged in the waiting area. Can't they clean in the night?”

She added that at 12:00 officials started flocking out for lunch, and at 13:00 the doctor would normally go away for lunch and come back after 14:00. “We are not saying that people must not have lunch, but, somehow here, we patients are being disregarded,” she said. “I looked at the woman who had brought her sickly, weak son for a doctor and how he lay powerless on her lap, and my heart bled.”

She said the fact that patients had to queue in four queues before they could get to the pharmacy was an aggravation of matters. “Officials are just slow, tend to chat with colleagues and sometimes they tell you that they can't see your file, so you must come back tomorrow,” she said.

“Maybe the Department of Health should add more staff to the hospital. When I was admitted to the hospital some two months ago, I shared a ward with other two patients who were very ill. One had diarrhoea and she would soil the toilet seat and around it on the floor, and when I informed the nurses that the toilet needed to be cleaned before I could use it, they would tell me that they didn't sleep in the ward and that they had homes to go to.”

When she was discharged, she saw a 'suggestions box' at the admin office and decided to take her time detailing her complaint in the form of a suggestion, in the hope that the hospital would turn things around. “I wrote of how patients spent two weeks in one gown, and how they used one pair of sheets for over two weeks,” she said. “I only wanted them to check and change the situation, but a female official called, demanded my name and where I stayed. Then I told her I was not going to yield to her bossiness. We now fear for our lives; we might lose our lives.”

The Limpopo Department of Health's media liaison officer, Mr Thilivhali Muavha, said that the concerned parties should contact the CEO in any concerned hospital, so that she or he could investigate the matter and see that it was tackled. "However, with regard to the Memorial Hospital, the waiting time is 3 to 4 hours since it is a very small hospital," he said. 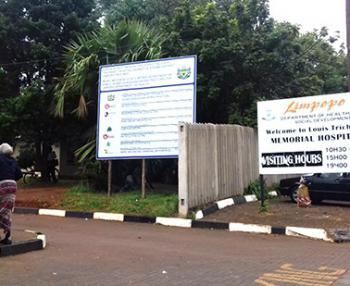