The Thohoyandou police in the crime-riddled Thohoyandou area have vowed to clean schools of drugs and school gangsterism.

Last Wednesday, the police, accompanied by members of the Youth Against Crime in Thohoyandou, raided the local Ligege Secondary School at Duthuni, where they searched for drugs, cell phones and weapons.

About the operation, Thohoyandou police station commissioner Brig Willie Mashava said it was part of their Safer Schools Campaign, targeting schools which had become havens for drugs such as nyaope and dagga, and weapons.

Mashava said drugs had a devastating effect on learners who ended up losing focus on their schoolwork and becoming dropouts. "We have these blitzes without notice as part of our campaign, which is paying dividends. Through the campaign, we have helped rid many schools of drugs and weapons.”

He added that they did not only do the searches but also made time to speak to learners about the dangers of drugs and gangsterism. “We also encourage them to respect their educators and to focus on their education as it is their only passport to a brighter future," he said. 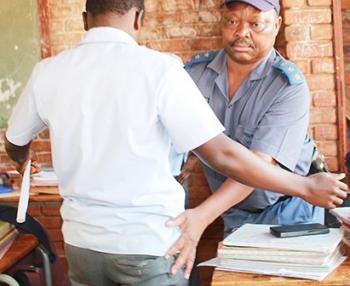 A police officer searching for  weapons, drugs and cellphones.