An inventor from Tsianda Ha-Mutsha is hoping to raise R15 million to help his company to further develop a glove that will make it possible to communicate better with deaf people.

Lucky Netshidzati (26) demonstrated his invention at expos earlier this year and his wearable glove concept captured the imagination. The glove makes use of sensors that can translate sign language into text and voice.

Netshidzati explained that the gloves were designed using virtual-reality gesture controls to assist deaf people and can be used to carry out everyday activities that would otherwise be difficult for those with hearing impediments. “The glove converts sign language into voice and texts for the people who can't understand sign language, so that they can have a proper conversation. The gloves’ sensors work with a mobile app,” he said.

He explained that growing up in a deaf community was not easy. “My mom doesn't even have a bank account because she struggles to communicate with the people at the bank. Sometimes deaf people get wrong medication at hospitals because of poor communication.”

The idea to design a glove that can “speak” to others has been with him since 2015. In 2018, he met an IT engineer, Tebogo Mthombeni, and the concept started taking shape. Mthombeni is the owner of a company called BIFI Technologies. The prototype that the two inventors built made use of a variety of sensors to detect finger movements.

Netshidzati established his own company, Rudzambilu Holdings, with the aim of developing telecom systems that cater for persons with disabilities. He also wants to bridge the communication barrier between hearing people and people with hearing impairments. 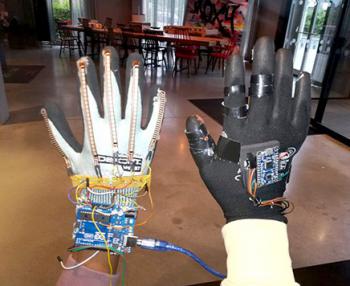