Chaos and mayhem reigned supreme at Malavuwe outside Thohoyandou on Monday evening as angry residents in the village wreaked havoc, blocking roads with rubble and burning tyres. The fiasco only ended after three households were burnt down.

In the early hours of Tuesday, the police had put nine residents behind bars as a result of the incidents. The ages of those arrested range from 18 to 51.

The ugly scenario was sparked by the alleged ritual murder of an elderly woman in the village last week. The granny, Ms Mmbengeni Malise (97), was discovered in a pool of blood with several stab wounds on her body. She was found inside her two-room house.

Some cash was allegedly found under her bloody corpse.

Sources close to the situation, who preferred anonymity, said residents had become agitated after realising that the police were not acting on the names supplied by residents as potential suspects in the murder. The source further indicated that those implicated were warned earlier to vacate their homes, but they decided not to leave. This is said to have angered the residents, who decided to take the law into their own hands.

"We are tired of these senseless killings. We have identified them as killers, and we begged them to leave our village or face the consequences, but they decided otherwise. They deserve what they got. People are angry and it is only luck that no one was killed during the three incidents," the source said.

Another resident, who also did not want her name published for fear of reprisals, said the police were equally to blame for the whole scenario. “The police are testing our patience by not arresting the culprits. If they were serious, they would have at least taken them in for questioning​, but they decided not to act. We now suspect that there could be members of the police who are working with these killers.”

The person added that members of the community were still waiting for the result of a post-mortem. “We suspect their [the police’s] complicity here,” said the resident.

Limpopo police spokesperson Col Moatshe Ngoepe confirmed the incidents and the arrests. He said the suspects had been charged with arson and malicious damage to property.

The incidents have also received strong condemnation from the Limpopo police commissioner, Lt Gen Nneke Ledwaba, who warned that those involved would face the full might of the law. “In respect of the murder of the granny, there is no arrest yet,” he added.

Ngoepe said that investigations were continuing and the police were appealing to anyone with information that could lead to the arrest of the remaining suspects involved in the incidents of arson, malicious damage to property and those responsible for the murder of the elderly woman, to contact D/Sgt Rembuluwani  Nekhavhambe urgently on 071 511 1213 or 015 960 1080, the crime stop number 0860 010 111or the nearest police station. 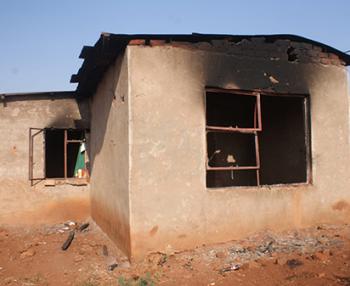 The burnt down houses at Malavuwe where angry residents torched houses belonging to people they suspect of having ritually murdered a granny in the village.