Vutomi Khosa (21) and Maambele Khosa (23) are two young women running a successful art gift business together, but the venture did not start with fortune and success.

“Having studied away from home, we have always felt like home is nearer through gifting each other and being 'post woman' for each other when we exchanged gifts with our families and friends from home,” Vutomi said. “This is how we started a gift company, Grandeur Giftery.”

A marketing postgraduate, who hails from Tiyani village, Maambele said: “We are in a gift-delivery service rather than product-based kind of a business. We don’t stock products and sell them, but we buy products on request and deliver.”

The idea came from how they used to 'gift' each other, be it at seasonal occasions or non-occasional moments. “We would randomly surprise each other with the little things we had,” Maambele said. “Gifts are meant to show that one cares and loves, and also to bridge the distance between those who care for each other.”

The two 'sisters' are in love with South Africa because – they say – being a woman in South Africa means being a human being who is capable.

“Regardless of all the challenges that women still face in South Africa, we cannot ignore the fact that there are great women out here and are doing all they can to inspire many of us,” said Vutomi. “Women should know that 'competition' is outdated; as women we should rather learn to complete one another.” 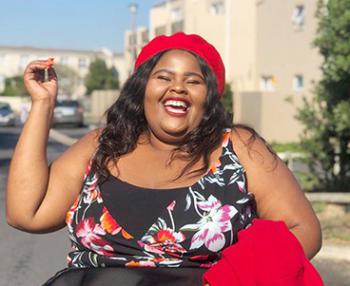 Vutomi Khosa is all smiles when she thinks about about the importance of sisterhood.

Maambele Khosa says that 'gifting' is a way of showing that one cares.