Choas in Tshikota over dry taps

Residents of Tshikota township took to the streets on Tuesday and Wednesday, demanding a constant flow of water.

They barricaded the main road that passes by the village with stones, burning tyres and tree branches. No schooling took place in the township. On Wednesday, the police used rubber bullets and teargas to disperse the angry residents, who wanted to march to the Makhado Municipality.

A resident of Tshikota, Ms Rose Mathekgane, said they had decided as a community to close all roads leading to the township and the R523 road to Vivo “while seeking an ear from the municipality. We are tired. We have decided to give them a hard time by peacefully closing the main road from Vivo to Louis Trichardt. Maybe they will listen to us, and if they do not, we will stay here until we get water to drink, cook and bath”.

Mathekgane said because the municipality had failed to deliver services such water, the collection of refuse and road maintenance, the municipality was to scrap all large water debts because they were not using water, so that there would be no community member who paid for unrendered services. “Everybody is aware of the fact that our communities have not had a constant supply of water for far too long,” she said. “

She explained that crime was also rife in the night as a result of the lack of lights. “We demand that high mast lights be erected around our ward in order to reduce crime,” she said.

Ms Irish Magoro said the community had raised tangible and valid problems and expressed the hope that the leadership of the ANC would “attend to this issue before our people die of thirst”. She slammed people, however, whom she described as the "minority with minor minds" to stop using the community for their own purposes, specifically referring to xenophobic attacks.

She said the fact that the municipality was not able to give services to the community was not surprising, “as what they know best is corruption”. She explained that the community had decided to embark on a protest march after realising that the challenges they faced were not being addressed by the municipality. “False promises were made to us, without implementation of the promised projects or services,” she said.

On Tuesday, different stakeholders, community members and Makhado Municipality executive committee members, led by the mayor, Cllr Samuel Munyai, met to resolve the problem. The residents raised their concerns and he promised to send their grievances to the Vhembe District Municipality (VDM). He also promised that the Makhado Municipality would sit down and tackle their concerns with the VDM. He said that the residents would get a response after they had met with the district officials and he invited the district officials responsible for water to come and address the residents.

VDM’s spokesperson, Matodzi Ralushai, said the municipality was aware of the problem. “It is just a misunderstanding between residents and their leaders that led to the protest,” he said and added that they were trying to repair the pipes, but their technicians could not go into a hostile area. “It is just a few lines that are not working, and we are trying to solve them,” said Ralushai.

He further said that the other problems that were denying the community water were theft and vandalization of water pumps. He promised that they were going to address the community. The problem will be solved when the Kutama-Sinthumule bulk-water supply project and pump station are finished.

* Shortly before going to press, Limpopo Mirror was informed that 12 persons, six women and six men were arrested during the unrest. They will soon face public violence charges in the local magistrate's court. Six police officials were also injured in the clashes with the residents. 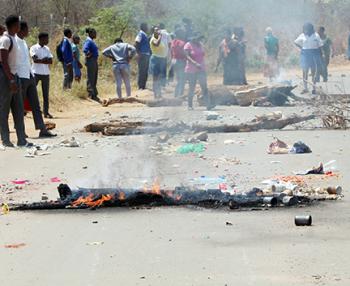