The local agricultural unions welcomed the renewed efforts by the police to implement rural safety strategy plans. The police’s revised plans were announced by the Minister of Police, Gen Bheki Cele during a visit to the area last Friday.

“The fact that rural safety again has been highlighted as a critical problem in South Africa, which urgently needs to be eradicated, is a good starting point,” said Christo Snyman, main coordinator of Soutpansberg Rural Safety. Snyman said that people should be encouraged to get involved and to work together with the police and other institutions to combat the perpetrators of crime on farms and in rural areas. “We believe the revised strategy will address some of the most important issues when looking at rural safety,” he said.

Snyman suggested that farm murders should not be classified as a regular crime, but rather as a crime against humanity, so that appropriate action could be taken by the legal system.

Henk van de Graaf from the Transvaal Agricultural Union urged the police minister to continue speaking more about farms attacks in parliament. He also said the revised strategy should not be just be a mere document, but a working document aimed at reducing crime in farms and rural areas.

Before the launch Gen Cele, his deputy, Makhado Mayor and other Limpopo government officials visited two farms, namely the Limpopo Dairy and the Vhumatshelo Project, both in Madombidzha area.

At Limpopo Dairy the Makhado Station Commander, Colonel Nyelisani Mabatha reported on the crime statistics. Colonel Mabatha said that in the Makhado policing area murders are not a serious challenge. During September no murder cases were reported. Burglaries on farms and residential homes remain a problem, but even these figures have declined the past few months. From April cases of burglary from properties dropped from 38 to 21 in September.

Addressing farmers and the residents of Makhado, Gen Cele said: “Thieves do not come from rain. You stay with them. You know them. Work together with police to squeeze out space for criminals.” Cele also urged the police to use the same vigour they apply on cash heist to protect farmers.

The National Police Commissioner General Khehla Sitole said that policing in rural areas will be improved with additional resources and through a multi-disciplinary collaborated strategy.

Forty new police vehicles were handed over to the Limpopo province as party of the rural strategy. 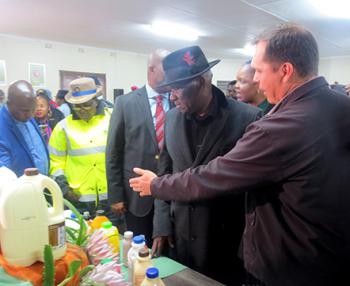 Tobias Fourie (right) from Limpopo Dairy shows Minister Bheki Cele some of the products produced on the farm.