The Democratic Alliance (DA) in Limpopo on Thursday announced that they will be writing to the MEC for Agriculture, Nandi Ndalane, to request coherent intervention to curb the outbreak of foot-and-mouth (FMD) disease in Limpopo.

On 1 November, veterinary services were alerted to clinical signs suspicious for FMD in a herd of cattle on a farm in the Molemole district (Dendron area) of Limpopo. The outbreak follows on the heels of another FMD outbreak in Limpopo earlier this year when the Department of Agriculture, Forestry and Fisheries (DAFF) on 7 January confirmed the presence of FMD in Limpopo’s Vhembe District. As a result, South Africa lost its World Organisation for Animal Health (OIE) recognised foot-and-mouth-disease-free zone without vaccination status. This had disastrous consequences for both the local and international meat export markets.

The DAFF on Thursday this week confirmed that the presence of FMD was found in a herd of cattle on a farm located in the previous FMD free zone of South Africa. “Samples were collected and FMD was confirmed on 1 November 2019 by the Onderstepoort Veterinary Research Transboundary Animal Disease Programme,” said the DAFF in a press release.

The DAFF said that further identification of the strain is in process to determine the likely origin of the virus. “The affected farm was placed under quarantine. Clinical examination of animals on the farm is being conducted to determine the prevalence of the disease on the affected farm. Measures were implemented to prevent direct or indirect contact between the different groups of animals on the farm. Backward and forward tracing is in process to determine possible origin of the virus, as well as locations to which the disease might have spread,” said the DAFF.

As for the DA’s call for coherent intervention, the DA’s Jacques Smalle (MPL) said in a press release that the intervention must include an expansion of the FMD zone in that area to restrict movement of hooved animals. He called for law enforcement to implement these restrictions and to confiscate and destroy animals that are transported outside the area. Smalle also asked that vaccination teams be deployed to the area to vaccinate animals and inspect surrounding farms to determine the extent of the outbreak.

“It is clear from the outbreak outside the so-called red zone, that the department has relaxed some of its measures which resulted in infected cattle coming into the FMD-free zones. This is of great concern and it is now imperative that control measures in the red zone are immediately tightened and that inspections are conducted on all cloven-hoofed animals that leave this zone,” said Smalle.

FMD is a highly contagious viral disease which affects cattle, pigs (domestic and wild), sheep, goats, and other cloven-hoofed animals. Signs of disease in animals may include depressed animals, sores in the mouth of animals causing reluctance to eat, and lameness. The disease does not affect human beings and it is safe to consume products of cloven-hoofed animals, such as meat and milk.

“Farmers in the whole country are cautioned to observe bio-security measures – not to allow any new animals into their herds, and to minimize the movement of their own herds to other farms. Any suspected case of the disease in animals must be reported to the local State Veterinarian immediately,” said the DAFF. 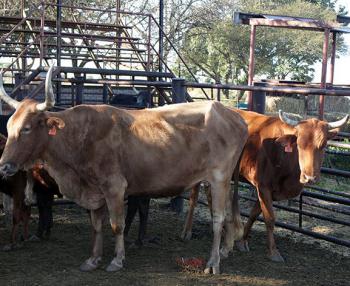