The communities of Masisi, Gumbu, Sigonde, Tshenzhelani, Mukununde and other villages within the Musina Municipality are literally picking up the pieces after a heavy shower and strong wind damaged numerous houses on Sunday night.

The storm destroyed the roofs of hundreds of houses and caused other damage. The victims are mostly from the poor rural area, and most are unemployed. Earlier this week, residents whose houses were damaged were seen trying to fix and replace the corrugated iron roofs. Many of them had lost all their belongings in the violent storm.

Three people at Gumbu were slightly injured. They were treated at the local clinic and later discharged. Some of the storm victims complained that they had not yet been assisted.

Ms Nkhumedzeni Mbedzi indicated that when the storm hit her village, she was at home with family members, trying to remove the furniture. Her house’s corrugated roof was badly damaged and some of the sheets were completely blown away. She is now temporarily living with her neighbours.

One of the affected residents, Mrs Veronica Mamphadeni, said she thought a tornado had touched down or that lightning had struck her house. “I could not see properly as it was raining heavily, and it was also hailing.” The storm subsided after about two hours and when she went out, she found that the roofs of her two houses had been blown away.

“When it happened, I thought it was the end of the world, as the wind was howling and at the same time it was raining. We are now stranded without a place to stay. This is really a bad situation,” said Ms Gladys Ramarumo, whose children were injured when her house was damaged in the storm. Part of a wall had collapsed.

The spokesperson for the Vhembe Municipality, Mr Matodzi Ralushai, said that the situation was very bad. “We heard about the incident and we immediately dispatched our disaster teams to assess the damage. We are making the necessary interventions. As a caring municipality, we do care about our community´s well-being, and we will do everything in our power to assist them,” he said. 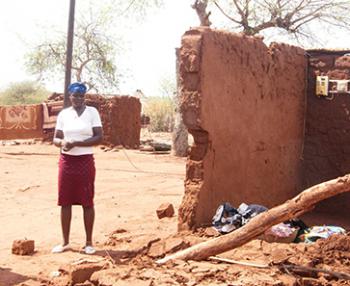 The mayor of Musina, Cllr Mihloti Muhlope (left), visited Othilia Neluvhola, whose mud house was badly damaged during the heavy rain and storm at Ha-Gumbu village.