As from 2015, and for the first time ever, ACI had its own ISP named Eyes for the World, with another well-known Louis Trichardt resident and Agora member, Sandy van Niekerk, as one of the driving forces behind the project. The purpose of this project has been to help children with sight problems with adjustable glasses, to help them to finish their schooling to learn a trade to be able to have a job.

This year the ISP has been proposed by South Africa and is called Keep a girl child in school. The goal is to distribute reusable sanitary pads to young girls in need.

The project is conducted in collaboration with Sherie ‘Palesa’ de Wet, founder and CEO of Palesa Pads Re-usable Sanitary Pads. The past week, Laura travelled to Gauteng for the launch of the project on 23 November at the Ikageng Children's Village in Soweto. The launch also included a factory tour of Palesa Pads in Germiston.

For the launch (first mission), ACI bought 300 kits to help 300 girls. Of these, 15 were given to Agora ladies who were present at the presentation, to use to show the product to friends, colleagues and family and to spread information. Afterwards, they will gift the kit to a girl in need.

Palesa Reusable Sanitary Pads provide a sustainable solution for up to five years, which is a girl's usual high school career. Palesa Pads can, of course, be worn by women as well. The tremendous savings on sanitary products contribute to the financial well-being of their families. Palesa Pads are also better for the environment in that they do not contribute to landfill as is the case with disposable pads. The pads are simply washed and reused each month.

According to Laura, ACI plans to visit Botswana, Zambia and Romania and any number of the 22 countries in the Agora family as part of the project. During the hand-over days, the Palesa team will provide menstrual-health education in a fun and informative way. Girls are also shown how to use and wash their pads and they are given the opportunity to ask questions from registered nurse Rebecca Coetzee.

ACI is a club for women worldwide, from the age of 40, with different professions, hobbies and interests but who share the same values. Today ACI is represented in 21 countries around the world and is working together with other clubs from the Round Table Family. Agora SA has three clubs, the first of which was established in Louis Trichardt, known as Agora Club Nr 1 Amarula. The second club to be established was Club Strelitzia in Johannesburg, followed by Club Kopano in Soweto. Currently, Club Agora Protea is in formation in Cape Town.

"The project ‘Keep a girl in school’ was written in the stars! So many fortunate co-incidences and chance meetings amongst the members of Agora Strelitzia eventually led to them presenting the initiative in Morocco at the Agora International AGM on behalf of Agora South Africa. We were so excited when we heard that our initiative had won the vote – and then the reality set in – there was a lot of hard work to be done. As the National President of Agora Club South Africa, I am very confident that with the assistance of every member within the three clubs (soon to be four) we will do South Africa proud. I am in the fortunate position to have had the experience of  working with Sandy van Niekerk, convener of the previous Agora ISP 'Eyes for the World' which was so successful it was adopted a second term. The ladies of Agora Club South Africa are dynamic, enthusiastic and committed to service. I look forward to doing my bit towards keeping a girl child in school," said Laura.

For more information about the project or Agora as service organisation, phone Laura at Tel 083 404 6751. 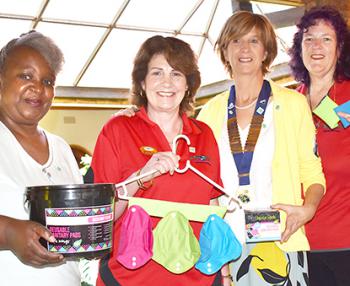