The recent good rains brought hope to livestock farmers in the Vhembe area who were feeling the burden of the severe drought in the area.

Farmers were left in limbo and could not produce much, resulting in higher shortages of farm produce and skyrocketing prices. Many local farmers have described the drought as the worst in years and that its effects will be felt for a long time to come.

The president of the African Farmers Association of South Africa (Afasa) in Limpopo and also its national director, Mr Tshianeo Mathidi, said that the recent rainfall had brought hope to livestock farmers. He said that some of the rivers that had been dry were overflowing after the rains.

This rain was welcomed by residents of the Vhembe region. Water has been a scarce commodity in most parts of the district, with some of the villages going for months without water to drink. Stock farmers were also not spared as they had to buy fodder and arrange for emergency water.

Mathidi welcomed the rain and said that it was a sign of good things to come. “Water is life and as farmers we have been struggling for a long time with a drought that had forced some of our members out of business. With the rains that are forecast, those who have worked are sure of a good harvest,” he said.

He said the rains would impact positively on some farmers and negatively on others. “Those who have not prepared their farms in time will not be able to prepare as the soil will be wet. Water sometimes breeds diseases, which need to be controlled all the time. All in all, rain is good as farmers will not have to buy fodder any longer because of the grass everywhere. It is good for us and it will yield good returns for us in the farming industry,” he said. 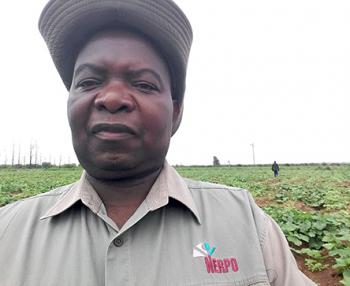 Tshiane Mathidi said that local farmers were happy after the recent rains.