“I declare this meeting illegal and people should leave now,” said Mr TN Mathumba after barging into a meeting convened by the Songozwi Victim Empowerment Programme (SVEP) at the SAPS barracks in Louis Trichardt last Thursday (21st).

The SVEP is a non-profit organisation that was set up to try and assist victims of, among others, family violence. The past few years the NPO battled to survive, with limited funding and a leadership vacuum. According to Mrs Benita Kaldine, programme manager of the SVEP, the meeting was scheduled to choose new board members and to comply with the legal obligations of the NPO.

Several weeks before the meeting, letters were sent out to various stakeholders, informing them of the meeting and requesting them to become involved. Most of the letters were delivered by hand to a large variety of stakeholders and a lot of effort was put into arranging the mandatory meeting.

An hour into the meeting, Mathumba stormed into the room, completely ignoring the person chairing the meeting. Mrs Kaldine respectfully asked Mathumba to sit in the chair next to her, but he refused and continued telling the room that there was no meeting.

Mathumba claimed that he was the chairperson of the SVEP and uttered several veiled threats to the people attending, among these that he would arrange that the SVEP be put out of the premises where they cater for victims.

Prior to Mathumba’s arriving, the NPO’s constitution was briefly discussed. The constitution states that office bearers are elected for a period of one year. It later transpired that Mathumba was elected as chair of the board in 2011 and his term had long since expired.

The individuals who had been invited to attend the meeting took a few minutes to fully comprehended what Mathumba was putting across.

Anton van Zyl, who had attended the meeting in his capacity as a director of the Bergcare NPC, a non-profit organisation aimed at addressing socio-economic needs in the region, started questioning Mathumba on his claims. He wanted clarity as to when Mathumba had been elected as chairperson and also whether Mathumba’s name was listed as a director at the NPO Directorate in terms of the NPO Act.

Mathumba refused to answer the questions, saying that all questions would be attended to at a meeting to be held in a week’s time.

Another member who had attended the meeting, Mr Elton Makhadi from the Legal Aid Board in town, wanted to know why Mathumba had not approached the court for legal action to stop the meeting, should he feel that it was unconstitutional. Once again Mathumba refused to answer any of the questions.

Kaldine tried several times to interject but was denied the chance. Walking up and down the room, Mathumba ordered one of the volunteers who attended the meeting to leave the room.

“You were very much aware of this meeting. I gave you a copy of the invitation,” said Kaldine in trying to clarify the legality of the meeting.

The meeting was finally called off, and as people walked out in pairs, Mathumba ordered them to leave the premises.

In a telephonic interview Col Mabhata, the station commander, denied having received letters complaining about the conduct of Mathumba. She said she would only respond when she returned to the office in a week’s time. 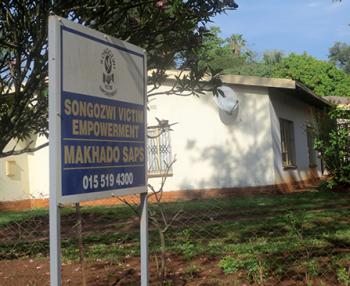 The premises used by the SVEP in Louis Trichardt.