Commuters are fed-up with what they describe as shoddy service from a local bus company, Great North Transport (GNT) and demand that the company’s operations be halted on the routes between Elim and Nzhelele to Louis Trichardt town.

The common complaints are that the buses arrive late or do not arrive at all. Commuters also complain that the buses are unroadworthy. They claim that GNT is putting their lives at risk by using unsafe buses.

One of the commuters, Ms Mavis Mulaudzi from Elim, said the company had already cost a number of people their jobs. The commuters arrive late at work because the company does not keep to its own bus timetables.

She said that for a number of years the operator had refused to solve the problem of the frequent breakdown of its buses. “I have been waiting for a bus for almost two hours,” she complained. “I have no choice but to continue using the bus, because it is the cheapest option. Taxis cost twice as much,” she lamented. “We still wake up every morning to go and stand at the bus stop with the hope that the bus will arrive on time, but that never happens,” she said.

Some of the commuters said they feared that they might lose their jobs because they knew their bosses would not be pleased if they arrived late. One lady said her bosses told her they would have to replace employees who frequently arrived late for work.

The area’s commuters want their plight to be brought to the attention of the monitoring and evaluation section of the MEC for Public Works, Roads and Infrastructure.

The spokesperson for Great North Transport, Mr Patrick Monkoe, said that they were experiencing a shortage of buses but were in the process of acquiring a new fleet. 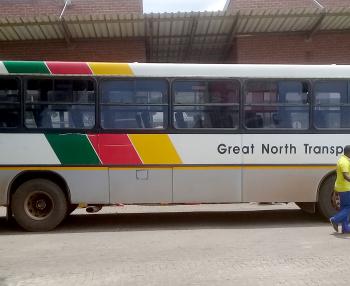 Great North Transport is experiencing a shortage of buses.