Zim children left to fend for themselves after parents' arrest

“It’s not our problem,” Zimbabwean mothers were told when they were arrested last Thursday morning. They were complaining that they had children at home, waiting for them to return. The mothers formed part of the group of roughly 40 illegal immigrants who were arrested during a police operation in Tshikota, next to Louis Trichardt.

The law-enforcement teams pounced in the early morning hours. The targets seem to have been the many undocumented foreigners staying in the Tshikota area. Among the arrested were mothers who claimed they had left their children in the care of neighbours.

“I really do not know what to do. Police appeared in numbers while we were waiting for a truck to take us to work on a farm in Levubu. We told them [the police] some of us have children, but they merely turned a deaf ear to us. As usual I had left my 4- and 7-year-old children in the care of a neighbour. Now, if they keep us for days, I am worried about my children. I cannot burden the neighbour for days,” said Collieta Sibanda in a telephonic interview.

The interview was last Thursday. By Tuesday, the situation was still unchanged and, as far as could be established, Sibanda was still being held at the police cells.

Sibanda explained that she had been in the country since 2017. The 37-year-old Zimbabwean citizen said that she decided to come to South Africa because of the extreme poverty in her home country.

At the end of August this year, the United Nation’s news service carried a report stating that Zimbabwe was facing its worst hunger crisis in a decade. The World Food Programme (WFP) reckoned that more than one third of the rural population in Zimbabwe would be food insecure by October 2019. Half of the country’s population – 7.7 million people – were considered to be food insecure, the WFP said.

With the assistance of some of the Tshikota residents, Limpopo Mirror phoned some of the people being detained. Most of the mothers speaking to the newspaper said that they had fled to South Africa in search of any form of work to help their families back at home. The arrested claimed the police never took heed that some of the mothers arrested had left children at home.

The Zimbabweans admitted that they did not have the documents required to regularise their stay in the country but said that the food crisis in Zimbabwe had pushed them into this predicament.

Another mother who was very worried about the well-being of her children was the 26-year-old Precious Sibanda. She had to leave her 2-year-old child with a neighbour.

“My neighbour is under the impression that I will come back later in the day, but now that I am arrested, I am not sure how police will treat the matter. Police should allow us to get our children. We cannot be separated from children,” said Precious. She said that they had informed the police that they had left children behind, but to no avail.

A neighbour who was looking after Collieta Sibanda’s children decided to take them to the police station on Friday, to prove to the police that Collieta had children.

“The police denied the children entry into the station, so I left the children alone at the gate and proceeded to go and meet Collieta. I wanted to find out how I should go about feeding the children, but I was not given enough time for such a discussion,” claimed the neighbour.

The neighbour said she also came across a lady with a baby that was still being breastfed. She claimed that after the arrest, the police did not want to give the mother a chance to first feed the child.

On Saturday, Limpopo Mirror visited Tshikota to try and find out what had happened to the children. We found Collieta Sibanda’s husband where he was looking after the children. After receiving news that his wife had been arrested, he had to rush back home from Polokwane, where he is working.

“This is going to cost me my job. The police are taking their time to settle this matter, and how am I going to convince my employer to approve these self-claimed leave days?” he lamented.

Questions about the arrest and the abandoned children had been sent to the Makhado police’s spokesperson since last Thursday but were not answered. Media enquiries were referred to the provincial spokesperson, Col Moatshe Ngoepe, who in turn referred them to Brigadier Motlafela Mojapelo. By Wednesday morning, no reply had been received and as far as could be established, the women were still being held at the Makhado police station’s cells.

A spokesperson for the Zimbabwe Community in South Africa, Bongani Mazwi Mkwananzi, said that allegations that young children were denied an opportunity to be fed were serious. He said international law was clear on breastfeeding. “The mother should be put in a separate room and be allowed to feed the child,” he said. Mkwananzi added that these were ordinary Zimbabwean people who were trying to make a living and it showed the magnitude of the economic crisis in Zimbabwe.

According to Mkwananzi, when it came to older children, social services needed to be involved and tasked to take care of the minors. He said the undocumented immigrants should be charged within 48 hours and deported, but minors could not be arrested

According to Save the Children South Africa, a non-profit organisation, the Children’s Act states that whenever children are without visible means of support, they should be assigned to a designated social worker who needs to assess the current care option. If it places the children at risk of any sort or jeopardises their care, then alternative care options need to be considered for those children. As a matter of general principle, it is always in the best interest of children to be in the care of their parents. 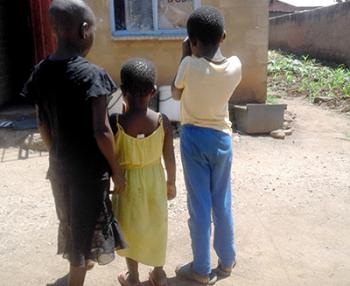 Some of the children whose mothers were arrested. Limpopo Mirror visited them on Saturday where they were staying with neighbours in Tshikota.