“My quick thinking saved me from certain death. Seeing that my whole body was going to catch fire, I immediately jumped into the river to save myself from the angry flames.” These were the words of Elmon Tshikhudo, former Limpopo Mirror journalist and now a full-time farmer.

He was speaking after being discharged from hospital after sustaining burn wounds when the generator he was using to pump water on his farm at Itsani, outside Thohoyandou, mysteriously caught fire.

Tshikhudo said he went to the farm as usual on the morning of the incident and started working. “I had a funny feeling and felt very tired before I even started working. I could feel that something bad would happen, and the bad feeling continued to depress me.”

He said he had received an order the day before to deliver a bakkie load of vegetables to a chain store in Thohoyandou. “I decided to water the vegetables before I harvested them, so that they would keep their freshness. I was watering the vegetables when I decided to go and check my generator, which was pumping irrigation water from the local river. When I arrived there, the generator was producing a funny sound and I moved closer to find out what was happening. I squatted next to the generator and before I could lay my hand on it, there was a huge bang. That was when the fire came out of the generator and caught my right leg.”

Tshikhudo said he realized that he was in danger and no one was there to help him at the time. “The generator was on the riverbank, and my only option was to jump into the river to save myself from the fire. By that time, my leg was already on fire and it was clear that the fire would catch my whole body. I then lifted my head from the water and screamed for help. The nearby farmers heard my screams and rushed to the river. They took me out of the water and later extinguished the generator fire. I was then taken to hospital, where I spent a week.”

“I was born to serve people and I will go back to farming immediate when fully recovered. I thank God because He has given me a second chance to live.” 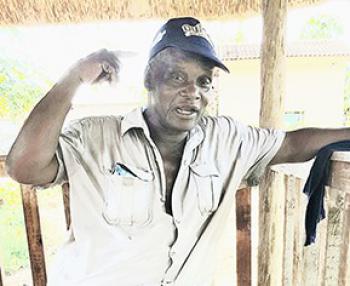