Mbaleni Primary School, Phaswana Secondary and Ralson Tshinanne Secondary in Ngovhela village were closed after accusations that the circuit manager had appointed a new principal related to him and of being politically connected. They also accuse the manager of redeploying some “lazy educators, who were rejected in many schools because of their incompetence in teaching”.

The angry parents, SGB members and parents held a meeting at Phaswana Secondary School and resolved to chase the learners from the school and close it. At Mbaleni Primary, no learning and teaching have taken place since the school opened, and they were complaining about the issue of the appointment of principals who were not recommended by the SGBs and panel and appointed by the circuit manager alone.

They said the learners would not return to classes until the new principal, Ms Tshifhiwa Tshivhase, and an educator deployed to work at their school, Mr Nthatheni Tshikovhele, were removed.

The chairperson of Mbaleni Primary School’s SGB,  Mr Sivhaga Lukoto, said during the meeting that they wanted their learners to get better and quality learning and teaching from the school, but they were worried that the circuit manager, Thifheli Tshivhase, had ignored the recommendations of the SGB when appointing the new principal of the school.

According to Lukoto, as SGB they were told to recommend the appointment of the new principal at Mbaleni in October last year, with due regard for the panel’s competency. They recommended candidates according to the outcome of the interviews, where the acting principal, Ronald Tshilongamulenzhe, was named “the top performer”. To their surprise, Ms T Tshivhase, who was the principal at Gondeni Primary and who was their third choice during the interviews, was then given the appointment letter.

“Her appointment came against the recommendations of the panel and SGB, with total disregard in terms of ability as envisaged in the outcome of the interview. It is a well-known fact that Tshilongamulenzhe was a deputy principal for almost 10 years, and ever since he took responsibility as acting principal of Mbaleni Primary, the school has developed tremendously with regard to infrastructure. The school also peaked academically just a year after his taking responsibility,” said Lukoto

Lukoto added that Ms Tshifhiwa Tshivhase (who is the current appointee)  was the principal at Gondeni and had no good track record at her former school, “and we are also worried about the redeployment of one of the laziest educators, who was chased from Tshivhulani Primary, to us in our school. We are also worried that the circuit manager told us about gender equity when appointing principals, but it seems equity was misapplied and coined to favour individuals who are closely related to senior officials in the Vhembe education department”.

He claims that the process is marred by corruption and nepotism.

The traditional leader of Mbaleni village, Chief Lukheli Mphaphuli, said he needed better education for learners in his village. He added that all forms of corruption and nepotism regarding the appointment of a new principal and the redeployment of another educator to Mbaleni Primary must be investigated speedily.

Limpopo education spokesperson Mr Sam Makondo told Limpopo Mirror that he found it disappointing that parents who should be protecting the education of their own children were chasing learners from a school.

“It cannot be good that where challenges exist, parents chase the learners from the school. Learners must be in class, while the department, together with the parents, are looking into their concerns,” said Makondo. 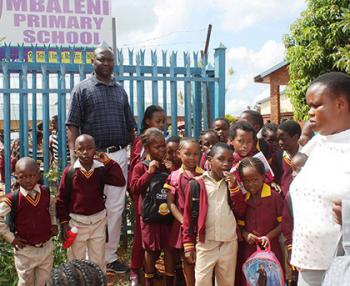 The chairperson of the SGB of Mbaleni Primary School in Sibasa, Mr Sivhaga Lukoto, photographed with some learners of Mbaleni after parents had removed them from the school.