Once upon a time Musina had tarred streets

The once beautiful border town of Musina is falling apart, and one only has to take a drive through it to realise this.

“What did Musina have before gravel roads?” asked one irate resident. Then the answer comes: “Tarred streets!” Some may find this funny, but it is not. “By now we’ve almost become use to the ‘hop along’ when driving through town,” remarked another resident and business owner. For her, the situation borders on the ridiculous.

Musina, like the whole of the Soutpansberg area, experienced good rains over the past two weeks and for that everyone is extremely grateful, especially people in this dry and arid part of the country. On 7 February alone, the town received a quick 60mm, causing localised flooding. This localised flooding damaged the already dilapidated street infrastructure even further.

A post about the state of Musina’s streets on Facebook over the past weekend sparked quite a reaction. “One of the roads leading to our primary school, it should be closed. Yes, that is a 500ml empty coke bottle in one of the holes ... why is nothing done?” reads the post on Musina Bakgat Biltong’s page. Accompanying the post were pictured of the sad state of Copper Street. Many responded by saying that the current state of Copper Street was so bad that it should be closed for safety reasons.

“Musina Local Municipality … no will and no shame!” was Cecil Henry Nel’s comment on the post. “Sad state of our roads in and around Musina. The problem is that our leaders don’t care about us and they don't care about our environment,” commented Sewani JC Kaunda. His advice was to get a few good Samaritans together, fix the streets and then take the invoices to the municipality to be reimbursed.

From all the comments the blame for the sad state of Musina’s streets is squarely placed on the Musina Municipality’s shoulders. Some recommend that the Musina Municipality should be taken to court to not only fix the roads but also to deliver better services. “Our town is dirty and dilapidated,” wrote Nicoline Olivier. Chantal Schroeder, however, warned that taking a government institution to court was not easy as these cases normally ended up in the High Court, which could cost the plaintiffs millions in expenses. For the interim, some commented that it would be better to get a few people together and repair the damaged roads themselves.

In response to the complaints about the bad state of the streets in Musina, municipal spokesperson Mr Wilson Dzebu responded by saying that although they had an effective maintenance plan, executing the plan was a problem. “…it is sometimes hindered by (a) shortage of resources, financial constraints and (a) shortage of manpower,” said Dzebu.

Dzebu added that they had identified various streets in town for urgent repair, Watson Street being one of them. “The damage caused by recent rains is huge,” he said.

The fact that the municipality is experiencing financial constraints was clear from Dzebu’s response that repair work could only start with financial assistance from the private sector. “With the financial assistance from De Beers Venetia Mine, an amount of R6,5 million has been put aside to repair damaged roads. The work will commence at the beginning of next month (March 2020),” said Dzebu. This project excludes the upgrading of Harper road, for which De Beers has already appointed a contractor, with work also to start next month (March) and to be completed the end of September 2020. “The Harper road is a different project altogether. It has nothing to do with the R6,5 million. The R6,5 million is for refurbishing internal access roads,” Dzebu said. He concluded that the municipality hoped to see a huge improvement in the state of their roads once these projects started. 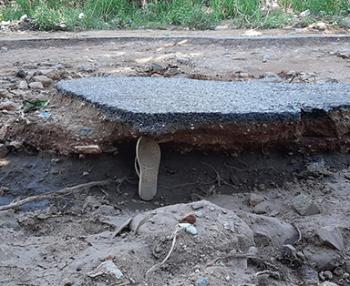 Due to its existing dilapidated state, large parts of Copper Street completely washed away during the heavy rains the past two weeks. This size 6 sandal placed underneath the original road surface gives readers an idea of the damage to the road. Photo supplied.

Many residents are saying that the current state of Copper Street is so bad that it should be closed for safety reasons. Photo supplied.

Not much is left of Frank Street, with motorists having to zig-zag across the road to miss all the potholes. Photo supplied.

The sad state of Scholtz Avenue in Musina. Photo supplied.

With a road surface like this, not many people will speed in Scott Street. Photo supplied.

The accompanying photos were sent in by a resident of Musina to highlight the sad state of the streets in this once beautiful border town. These are just a few examples and many, many more can be found. This picture is of Watson Street. Photo supplied.