The battle over the development of the Mavhungeni Farm near Vleifontein that is raging between the Mavhungeni Communal Property Association (CPA) and a group called Xikopokopo Community Farming seems to be far from over.

The piece of land near Vleifontein, which measures just over 1 200 hectares, formed part of a land claim filed in 2002. The land previously belonged to the SA government, but has some historic significance. Prior to the 1900s, the well-known trading family, the Cooksleys, lived in that area.

The title deed to the portion of the farm Vleyfontein 310 was handed over to the Mavhungeni CPA in March 2014. One of the conditions in the title deed is that the graves of John and Mary Cooksley need to be maintained. The Cooksleys’ store was well known in the 1890s and frequented by people like the late Vhavenda king, Makhado.

In his book, King Makhado Ramabulana, The Lion of the North, Mphaya Nemudzivhadi writes about a meeting in 1891 that Makhado had with Senator GG Munnik. “Then, on the following day, and at the appointed hour, Munnik and John Cooksley, accompanied by their wives, met Makhado at the chosen spot. Cooksley, a local trader since 1886, had become Makhado’s bosom friend and therefore was the right person to accompany Munnik on this mission.” Makhado was a regular visitor to the Cooksleys’ liquor store.

From what could be established, the land was expropriated by the former government in the late 20th century and incorporated into the then Venda homeland. When the Mavhungeni CPA took ownership of the land in 2014, several plans were in place to develop it. The CPA also received implements such as tractors to kick-start the farming projects.

As far back as 2005, long before the claimants took possession of the land, it became clear that a rift was developing between sections of the Mavhungeni CPA. A group calling themselves the Xikopokopo Community Farming Project broke away and the conflict gradually escalated.

The Mavhungeni CPA accuses the leader of Xikopokopo, Attorney Samuel Hlanganani Shirinda, of forcefully breaking up their land by selling stands off to people who are not beneficiaries of the CPA. They say that scores of opportunistic site seekers at Mavhungeni Farm could find themselves as big losers, after paying thousands of rands for illegal residential sites.

One source staying in a nearby community said that nearly a thousand illegal stand owners had “bought” property. Many of them have started erecting structures on the illegally acquired sites. These new “owners” have also put up fences around the sites and lately, businesses such as hardware stores have appeared.

Mr David Baloyi, chairperson of the Mavhungeni CPA, said that they were very frustrated with the Department of Rural Development and Land Reform’s reluctance to act in this matter. “We cannot do anything because of the problems with Xikopokopo,” said Baloyi.

Baloyi accused the Xikopokopo group of unilaterally demarcating land for themselves. “As the African proverb says: ‘When two brothers fight, strangers reap the harvest’,” he added. Baloyi said that beneficiaries often fought, and powerful leaders within the CPAs, or chiefs, exercised their influence, hoarded resources and reaped the benefits while ordinary people were excluded.

Two weeks ago, the annual general meeting of the Mavhungeni CPA was held at Mbhokota. “Mr Samuel Shirinda sent a group of young of people, who were drunk at the time, to disrupt and end the meeting,” said Baloyi.

The matter may be heading to court. According to Baloyi, they were issued with court papers by Shirinda, but when they went to court, Shirinda “found an excuse not to avail himself”.

During an interview with Samuel Shirinda, he denied that he was selling stands to people from outside the CPA. He said that he was demarcating stands for qualifying beneficiaries.

Shirinda said that the original executive members of the Mavhungeni CPA were all dead and the CPA was left with only one member, who had resigned in 2006. He said that a group calling themselves the Mavhungeni CPA were refusing to work with the community. According to him, this group had leased a portion of the farm to a commercial farmer, Mr Carl Henning of Munuzwu. Shirinda said the Xikopokopo Community Farming group did not agree with the lease. He also accused the Mavhungeni members of only benefiting themselves.

Shirinda denied that he and his group had sent young people to disturb the annual general meeting held at Mbhokota. He said that they had been invited by the Department of Rural Development and Land Reform to the meeting because the people attending the meeting did not constitute a quorum. 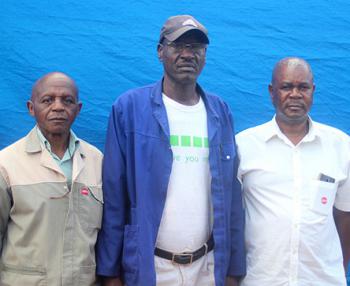 From left to right are Research Ngobeni, David Baloyi and John Baloyi, members of the Mavhungeni CPA.