More than two hundred refugees staying at the Matswale men's shelter were on Thursday moved to the Musina Showgrounds.

According to Mr Wilson Dzebu, Musina municipality spokesperson, the refugees were relocated to the new shelter so that they could also live according to the Covid 19 regulations by practicing social distancing.

The municipality provided the shelter but all other issues, according to Dzebu, will be the responsibility of the Department of Social Development.

Prior to this arrangement refugees were stuck, because they could not go on their normal routine of begging and trying to get some casual jobs.

“If we had not stocked up on some food before the lockdown, I am sure we could be going for 21 days without food,” said Enock Hassan, one of the refugees.

They had to forgo on other meals so that the food could last them for the 21 days.

The refugees said were aware of the Covid-19 regulations, but the regulations were a strain to their living. Most of them make a living from begging or casual jobs. During the lockdown period they cannot move out.

Before the refugees were taken to the show grounds, Bishop Simon Sithole, the owner of the refugee shelter, was pleading for organisations to donate food for the refugees.

On Thursday the Department of Social Development, Limpopo SAPS and Musina authorities transported the refugees to the show grounds.

Malipo Jacques, leader of the refugee community staying in Musina, was calling for donations. “I partnered with Médecins Sans Frontier [Doctors Without Borders] for three weeks, educating the refugees about health in general including Covid-19. In the process we donated some food and soap, but they are not enough to cover 21 days,” said Jacques.

Patrick Wazhire from the DRC, who arrived in South Africa in January this year, was worried about the social distance they should keep from each other as they were many at the shelter.

“We were many at this shelter and it is really hard to keep the social distance as required by the Covid 19 regulations, let alone more than 50 refugees sleeping in one tent,” said Wazhire. 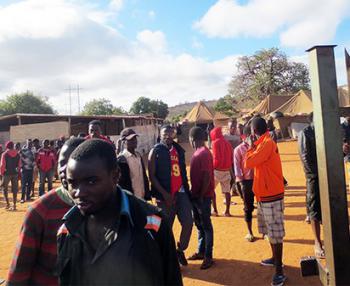 Refugees at Matswale men's shelter. According to Bishop Simon Sithole the number of refugees staying at the shelter has since increased. The photo was taken a year ago.