Respect is found in an own job

One young lady has found a way of beautifying her life, despite the lack of employment for many graduates in the country.

With a BA in indigenous knowledge systems, Nthonifheni Mudau, a graduate from the University of Venda, said that huddling in the darkness and crying foul about the lack of job opportunities in the country was not an option for her.

“I'm self-employed due to the shortage of jobs,” she said. “I had sent countless CVs to various firms, but I was unsuccessful, and that experience alone taught me to be resilient and seek other avenues to earn my bread.”

She used her savings from her schooldays to set up her small business, where she stocks up on eggs in boxes in Polokwane to sell in Vhembe. “I am glad that I had been saving because those small savings had come in handy when I had to start doing business,” she said.

She had learned business skills from her mother, Vho-Elisa Nepfumembe, who used to sell tomatoes and mopani worms. “She would give me and my younger sister, Gole Ramafamba, bowls full of tomatoes and mopani worms packed in packets and we would do door-to-door selling until the stock was finished,” she said. “I also personally used to sell sweets during my high-school time.”

In three years’ time, she hopes to own her own business with a solid structure. She believes that the business would then enable her to expose her leadership skills fully and allow her to create jobs for other youths. “I see myself taking on new and exciting challenges in an enjoyable environment and hopefully, this will be with my own company,” said the aspiring commercial farmer.

Whenever the going gets tough, Nthonifheni remembers some advice her mother had given her earlier on in life. “Many years ago, I learned an important lesson from my mother, and she really became my most important mentor,” she said. “She told me her secret not to give up was to ‘look at each day as a new opportunity to be your very best’. She told me to set high goals, be honest, never say no, and work with people who share my passion for doing the best.”

She stated that she enjoyed what she was currently doing with her life - being a young businesswoman. “I really love what I do, and I try to surround myself with people who share similar passions. I thrive on this type of environment,” she said.

However, she pointed out that her current challenge was a lack of stable transport to and from Polokwane. “I also want to expand my business, and I am looking for sponsors or the government to finance me, so I can have more stock to satisfy my customers’ demands at all times.”

So far, Nthonifheni is living up to the realisation of her name, which means “respect me” as she is making bricks to build her shop where people can come and buy eggs. 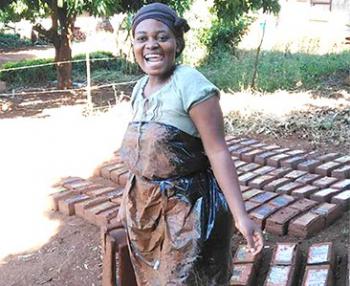 Nthonifheni Mudau is making bricks to build her shop where people can come and buy eggs. Picture supplied.