In a rather scathing ruling, Judge Legodi Phathudi declared that the establishment of the Mureri Royal Council and the new structures formed under the auspices of the United African Apostolic Church (UAAC) were invalid. The group, under leadership of archbishop David Mureri, are also interdicted from interfering with the activities of the UAAC.

The case was heard in the Limpopo Division of the High Court in Thohoyandou last Thursday (11th), following an internal battle at the UAAC that started even before the death of the former leader, archbishop Elias Miriri in December 2018.

The UAAC was founded by the late Paulos Matsea Miriri in 1912 and currently has more than 1,5 million church members. The church has its headquarters in Miriri at Ha-Mavhunga and is one of the biggest and oldest Zionist churches in South Africa, with branches in several parts of the country and in southern African countries.

The infighting made it to court on several occasions. In September 2019, Judge Francis Kganyago dismissed an urgent application filed by the David Mureri group to interdict the other group. The application was dismissed on the grounds that it was not urgent.

The David Mureri group were the respondents in an application filed by the UAAC late in December 2019. Ten applicants, which included Tshimangadzo Lesie Netshitongwe, the first of Elias Miriri’s eight wives, asked that the break-away group be interdicted and prohibited from meddling in the affairs of the church.

While the case was postponed on several occasions, the two groups managed to reach an agreement, allowing them to utilize the same premises, albeit during different time slots. The agreement was made an order of the court while the matter awaited a hearing. This agreement was not without conflict, and early in June this year, archbishop Itani Mureri appeared in court on a charge of assault. He had allegedly been involved in a scuffle with a security guard.

When the case served before Judge Phathudi last Thursday, he first had to rule on several objections raised by the applicants (the UAAC). Their legal team complained that David Mureri was defending the matter both in his personal capacity and on behalf of more than 40 other respondents. The submission was that David Mureri could not submit supplementary affidavits to court without first having obtained the proper authority from the other respondents to do so.

“The respondents failed to satisfy the court that David (Mureri) is authorised to so act on behalf of all respondents who are opposing the application,” the judge ruled. This effectively meant that the affidavits filed by David Mureri on behalf of the other defendants were not accepted by the court.

To further jeopardise the defendants’ case, the applicants successfully argued that the confirmatory affidavits could also not be accepted by the court. These were proven to contain numerous errors “casting doubt as to whether the deponents in the said confirmatory affidavits did indeed depose to the affidavit in the presence of the commissioner of oaths,” the judge found. Because of the numerous anomalies, the answering affidavits were ruled out.

Probably one of the more interesting aspects that came out in the court case concerns the constitution of the UAAC. The applicants argued that the church’s constitution had been filed at the Department of Rural Relations and Development in either 1970 or 1978. (The government’s date stamp is not clear as to whether the digit of the year was a zero or an eight.) The defendants, however, filed a constitution that was allegedly signed on 25 August 1967.

In court, the legal team for the UAAC pointed out that the type of font used for the “1967 constitution” was a computer font. No such computers were in existence in 1967, making it obvious that the document was a forgery. “I am persuaded to agree that the document purporting to be the constitution of UAAC … is not the document that was signed on 25 August 1967,” Judge Phatudi ruled.

After considering some more factors, such as the authenticity of documents served on the applicants, the judge ruled that the matter would be considered unopposed.

He then proceeded to deal with the factual background of the case and specifically Tshimangadzo Netshitongwe’s complaints that she had been intimidated and told to vacate her houses at Tshitasini as these were to be demolished. Netshitongwe said in court papers that her late husband, Elias Miriri, had entrusted her with the management of the family’s affairs. She serves as the “mother of all members of the UAAC” and as such exercised the power of archbishop, in consultation with the relevant organs of the UAAC.

Netshitongwe alleged that the intimidation started prior to her husband’s death and that he had obtained a protection order against David Mureri.

Judge Phathudi found that it was clear that Netshitongwe “was hands-on the management of the church even prior to Elias’s death”. He also found that the status quo prevailed after Elias Miriri’s death and that the structures established by the respondents were not in accordance with the provisions spelt out in the UAAC’s constitution. He declared that the structures, such as the Mureri Royal Council, the UAAC New Cabinet and the New National Executive Committee, were invalid.

Judge Phathudi agreed with the applicants that they had no alternative other than to ask the court for protection via an interdict. “They nurtured the church even during the lifetime of Elias. They reside at the property and have since 1966 been residents thereat. What other remedy will they have if their houses are demolished or even evicted, worse still, being sent back to Zimbabwe? South Africa belongs to all who live in it,” he said.

The court not only ruled that the structures set up by the respondents were invalid, but it also set aside the appointment of Chief Livhuwani Matsila, chairperson of the “new cabinet” of the UAAC. Chief Matsila, David Mureri, the Mureri Royal Council and members of the new national executive committee have been interdicted from interfering with the management of the UAAC. David Mureri was further interdicted from meddling in the affairs of the late Elias Miriri and he may not enter the homestead of Netshitongwe or her family.

“The respondents are ordered to pay costs of [the] suit, including costs that were reserved or ordered to be costs in the main application,” the judge ruled. 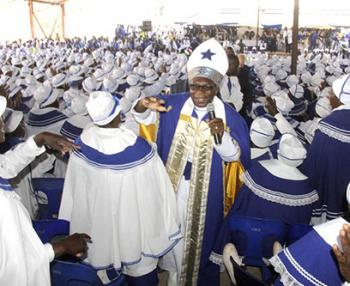 The late Archbishop Elias Miriri, photographed among his people during a previous conference. He died in December 2018, setting off a power struggle within the church.