Thulamela is set to become the epicentre of the Covid-19 pandemic in Vhembe District, with the number of cases reported doubling in less than a week. On Wednesday, the Limpopo Department of Health reported that 69 people had already tested positive for the virus in this municipal area.

The exponential growth of the infections was clearly evident the past week, with the Limpopo Province’s infections soaring past the 1100 mark. In Vhembe, the total as of Wednesday stood at 129, of which 81 cases were considered “still active”.

Whereas the rate of increase in infections was still moderate in some areas, the situation is worrying in Thulamela. On Tuesday, 23 June, Thulamela reported 32 cases, of which 21 were active. Eight days later, 69 people had encountered the virus, with 39 active cases.

In the Makhado area, the number of infected people jumped from nine on 23 June to 24 on Wednesday, 1 July. The number of active cases went from seven to 15.

In Musina, nine people tested positive for the coronavirus on 23 June, with eight active cases. A week later, it rose to 20, with 16 active cases.

The Collins Chabane Municipality has thus far been the least affected. On 23 June, five cases (all active) were recorded. On 1 July, the number stood on 16 cases, of which 11 were active.

The Limpopo Province started July with 1147 Covid-19 cases, of which 538 were active. Ten deaths had been recorded, but none in Vhembe District. The province conducted 31 254 tests. Of these tests, the public sector conducted 18 328 and the private sector 12 926. The bulk of the positive tests (834) stemmed from private-sector testing. 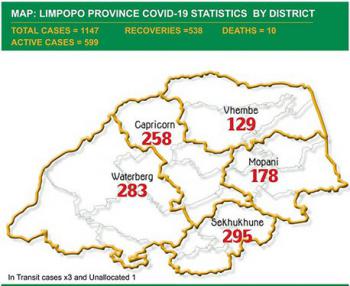