“My bread comes from carpentry”

One youth is the epitome of innovation and hard work as he has initiated a project that shines with the vuk’uzienzele mantra, which encourages people to get up and make things happen.

As a qualified electrical engineer, Tshilukwa discovered carpentry by chance when that opportunity availed itself to him in 2015. “I discovered that my passion was for carpentry when my grandmother, Vho-Nyawasedza Netshifhire, wanted a carpenter to fit a ceiling at her house,” he said. “I told her that I would do it for her since I had previously worked with a qualified carpenter to fit some ceilings at other people’s houses.”

At the end of the day, the old lady was satisfied and amazed with her grandson’s workmanship. People flooded the granny’s house to view the excellent work that Tshilukwa had done. One of those who came was a local, named Mr France Makethakhetha, who was bowled over by the young man’s work. “He gave me some work to do at his home, and after he was satisfied with my good work, he gifted me with a Nissan bakkie!” he said. “That was the greatest moment of my life.”

After some time, the young carpenter got a job at a retail store in Musina. On his way to and from work, he noticed a man who was working on wood and timber in his yard. “I approached him and asked if I could join him in the work, and he agreed,” he said. “In a short space of time, I had gained rare skills in carpentry, so that I decided to quit my job at the retail store and drove home to start my own carpentry business.”

He added that he went on to establish himself in the furniture-manufacturing industry, where his clientele had grown in a way that astounded him. “I realised later that clients found me reliable in that I didn’t compromise on quality,” he said. “My clients are brought in through my first clients.” 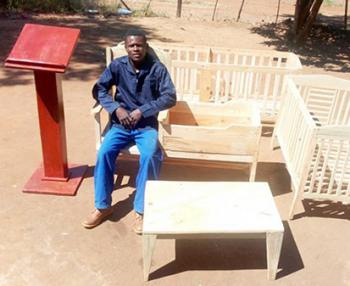