Members of the Valdezia community expressed their concern that a development structure, formed years ago, was hi-jacked by a political party and is being used to promote party politics.

The Valdezia Rural Development Association (VARDA) was apparently started some 10 years ago to assist in the development needs of the local community. “At our village there was no chief, and residents of this former Gazankulu area decided to form a community authority to run the affairs of the village. The community authority was like a council,” explained Mr Magezi Hlungwane, one of the community leaders.

Close to 10 years ago, the idea of establishing a development association, Valdezia Rural Development Association (VARDA) was embraced by the community. The purpose of VARDA was to start projects in the community that would stimulate job creation. Members of the Valdezia community contributed R50 each towards the association.

According to Glenda Furumela, the local DA councillor, VARDA has lost its focus because of the interference of ANC councillor Sipho Masuka. “ANC members are now serving on the committee of VARDA. The most worrying thing is that Masuka and other ANC members in the community structure took ANC T-shirts, writing VARDA on them,” said Furumela. “It is practically being used as a substructure of the ANC and as a platform for the enhancement of the ruling party’s programmes. This is now politicising the community structures and it does not sit well with some people in Valdezia,” said Furumela.

Speaking to Limpopo Mirror, Hlungwane said, “On its establishment, I also contributed money towards this structure, believing that it would bring development, but it never came to fruition. I now realised that this structure is only meant to disturb or undermine the authority of the Hlungwane Traditional Council.”

The regional spokesperson for the ANC, Tshifhiwa Dali, responded to a media enquiry, saying: “The ANC cannot be divorced from progressive structures in the mass democratic revolution. However, each structure takes full responsibility for its actions.” 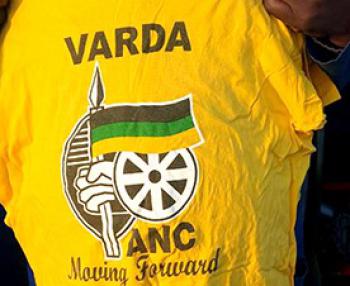 The ANC T-shirt with the VARDA inscription. Members of the Valdezia community feel that VARDA is a structure of the community and not a political party structure.