As a young man, Lutendo Titus Tshikovhi always wanted to start a business of his own, but he had no idea what kind of business he could venture into.

However, a time came when he went to a local car wash, and while he was still waiting for his car to get washed, an argument ensued between the car-washers and a client, who expressed dissatisfaction about bad service.

“The client had brought his car and tekkies to be washed, but the car-washers had damaged his tekkies because they were inexperienced in washing such shoes (something that had come as an added service because the client had wanted it to be done),” Lutendo said. “To me, that argument brought an idea that I must start a tekkie kitchen business, where I would specialise in washing tekkies.”

Lutendo started carrying out extensive research on which products to use and which ones to avoid if he wanted to do things properly. “I asked for a start-up loan from my parents,” he said. His parents gladly offered him some cash and he started operating his business right at his home at Itsani Tshisaulu village.

“I named my business Spick and Span, which I later changed to Sneaker Kitchen,” he said. “Admittedly, I made a lot of mistakes when I started out, but then I realised those mistakes were part of the growing factor in business. I soon realised that the cost was high to run a business from home; I needed a central place.”

He had to scout for an office to rent in town and, after many disappointments, he managed to get a space at the Thohoyandou Thulamela Information Centre, where his Sneaker Kitchen still operates from even today. “Most of my customers became my advisors. They suggested more services and provided guidance on how my store could look like and how l could improve,” he said.

Initially, his biggest challenge was the lack of marketing skills, most particularly for his kind of business, which was unique in Vhembe District.

“I required flyers and banners and, as my budget didn't allow for that, l started doing word-of-mouth advertising,” he said. “l would approach anyone whom I noticed wearing dirty tekkies, and from that point onwards l started having support and referrals.”

One of the clients, Phuluso Khakhu, lauded Lutendo for the exceptional services. “When l brought my tekkies for the first time, I was sceptical about the service, but then that mentality was proven wrong. Today I am an ardent customer,” Khakhu said. “Ever since I started bringing my tekkies to Sneaker Kitchen, I felt as if I won't be able to wash them the same again.”

Lutendo’s story of how he became a young businessman to reckon with is inspirational, and he hopes to open more outlets and employ fellow youths. He can be reached on 081 420 1146, Facebook (@Sneakerk.SA), Twitter (@Sneakerk_SA), and Instagram: (@Sneakerk_SA). 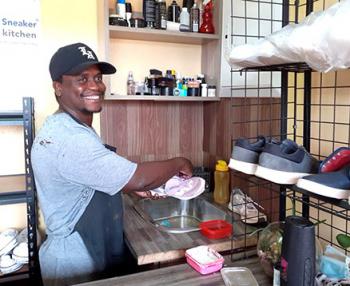 Lutendo Titus Tshikovhi had always wanted to start a business of his own.