The national spokesperson for the Hawks, Brigadier Hangwani Mulaudzi, came under scrutiny the past week with calls that he be suspended and that an investigation be launched into a R3 million Lotto grant that his foundation has received.

In July this year, the Limpopo Mirror reported that the Hangwani Mulaudzi Foundation had received Lottery funding to build a “sports centre” at Mukondeni village in the Mashamba area. The grant was paid out by the National Lotteries Commission (NLC) in July last year and work only began sometime late in June, almost a year after the grant had been paid out. The foundation, which was registered in 2017, has since changed its name to the Bono Foundation.

Nothing much happened at the site between the payment date and when a journalist contacted Mulaudzi about the project in early June this year. Soon after that, work began at the site, according to a source in the area who asked not to be named as he feared for his safety if his identity was revealed.

A reporter for the Limpopo Mirror was invited to visit the site on 24 June, where he met with Mulaudzi. Mulaudzi explained that the project had been delayed because he first had to engage the Mashamba village leadership and members of the community to obtain land where the facility could be built. This process was concluded in September 2019 and the project could commence. However, construction was badly affected by the Covid-19 lockdown period, he said.

Mulaudzi’s explanation for the delay was strange, as the NLC’s funding processes require that a site would have to identified before funding is approved.

During Mirror’s visit on June 24, the workers were busy with the finishing touches on the newly erected barbed-wire fence around the field. A grader was busy levelling the pitch, while an unequipped borehole had already been sunk. Electricians were busy wiring a ablution block that comprised seven toilets. A number of local residents were waiting at the site for Covid-19 relief packages, which included masks and food, to be distributed.

Photos sent to the newspaper this week show that a netball court has since been erected and grass planted on the field. The ablution facilities are still incomplete, with loose wiring visible in the photos.

“This is a rural area and carrying out a project in an area like this is quite expensive,” Mulaudzi said. “So far, it seems we have under-calculated the project cost, because we are now using monies from our own pockets to complete it, and that might come to anything between R300 000 and R500 000,” he said. “Even the food parcels, sanitisers and masks which we are handing out today here are all from our own pocket because we are now left with nothing from the fund.”

However, a well-informed source has confirmed that the foundation had received R100 000 from the NLC’s special Covid-19 fund.

Another high-profile person serving on the project’s steering committee is Makhado councillor Enoch Sithi. He expressed his satisfaction with the progress of the project, describing it as a big contributor to economic activities in the village. “The foundation and I had made sure that only local businesses and individuals were employed to render services on this project,” he said.

Not everyone seems to be impressed with the project and the manner in which a high-profile spokesperson of the police’s Directorate for Priority Crime Investigation (DPCI) – the Hawks – received funding from the NLC. Mat Cuthbert, a DA member of parliament, described it as a conflict of interest as law enforcement agencies are investigating the NLC for serious irregularities and possible large-scale corruption. He has called for Mulaudzi, who is now under investigation, to be suspended.

Ironically enough, several of the projects currently being investigated are in close vicinity of Mukondeni village.

Last month, Limpopo Mirror reported on the R11,37 million grant awarded to the I Am Made for God’s Glory (IAMFGG) NPO. The NLC, being extremely secretive about many of its multimillion-rand projects, initially refused to say where this sports project was situated. Tracking it down took 18 months and at first the project was believed to be at Mukondeni village, based on the letters of support issued by the local sports bodies and traditional leaders. What eventually transpired was that was no such project existed and that the NPO had used photos of the Mdabula stadium at Mdavhula village as proof that something was built. This specific stadium was built by the Thulamela Municipality several years earlier and all that the NPO had done was to do minor refurbishments.

The NLC to date has not responded to questions about the project and has also not indicated whether it would be investigating where the money had gone. The Department of Trade Industry and Competition (DTIC) has, however, conducted an independent investigation into this project. This grant, as well as two others, is currently being investigated by forensic investigators appointed by Trade, Industry and Competition Minister Ebrahim Patel. A criminal complaint has been laid in connection with a fourth grant. Evidence in this case, as well as at least three other cases, has been handed over to the police’s Serious Economic Offences unit.

In another case in the same area, the Vyeboom Youth Development NPO received a total of R15,1 million in Lotto grants since 2017. Of this money, R5 million was supposed to go towards staging a music festival. No information about this music festival could be traced. In August last year, the same NPO received a R10,1 million grant for a sports-related project.

The Vyeboom NPO has been dormant for many years. The Vyeboom Civic Association, a structure that initiated the establishment of the NPO, had no knowledge of the NLC grants. None of the structures at Vyeboom was aware of any such projects and no-one could give an explanation as to where the money had gone. The NLC again refused to divulge any information, telling reporters to file requests for information in terms of the Promotion of Access to Information Act.

“I am fearing for my life”

In an interview with eNCA’s Jeremy Maggs after details of the funding were revealed by Cuthbert last Friday, Mulaudzi denied any knowledge of Hawks investigations into projects funded by the NLC. “I don’t know about any investigation that is taking place within the NLC,” Mulaudzi said. He explained that his role was to communicate information about the Hawks’ activities and he merely passed on what was provided to him.

Mulaudzi told Maggs that criticism about the Lotto-funded project was part of a smear campaign orchestrated by “a certain individual”. He declined to name that person, but what transpired later was that he was referring to forensic investigator Paul O Sullivan.

In an interview with The Star newspaper last week, Mulaudzi said that he feared for his life after details of the grant had been made public. He was worried that people might think he was actively involved in investigations, he said.

“I don’t know what kind of message they are trying to send out. I have to observe countless times now when I’m driving or walking because people think I carry case dockets, and there is nothing like that.”

The NLC also came to Mulaudzi’s defence the past week, issuing a statement in which it says that the foundation’s application went through the normal application process. “It is important to note that the NLC does not allocate grants to individuals but to registered NGOs/NPOs that work for public good,” said the NLC’s spokesperson, Ndivhuho Mafela. “The NLC would like to urge all interested parties to familiarize themselves with its process and guidelines to avoid tarnishing the organisation's and grant recipients’ reputations,” he said.

Limpopo Mirror has perused a report compiled by private forensic investigator Paul O’Sullivan. In the report, O’Sullivan links the Hangwani Mulaudzi Foundation grant to the Limpopo Nelson Mandela branch of the ANC. Its senior members are councillor Enoch Sithi (the branch chairman), Thangwane Abedinico, Mulondo Victor Ramatsekisa and Hangwani Mulaudzi. Ramatsekisa is the father of Marubini Livingstone Ramatsekisa, the manager: Grant Funding Projects at the NLC. Limpopo Mirror has independently confirmed these and other details in the O’Sullivan report with a well-connected source with knowledge of the project. The source asked not to be identified as he feared for his safety.

Asked about the alleged involvement of the Ramatsekisa family in the project and whether this was not perceived as a conflict of interest, NLC spokesperson Mafela said, “Mr Mulondo Victor Ramatsekisa was never part of the steering committee of the project”.

Information also surfaced that the foundation had received an additional R100 000 as part of the NLC’s Covid-19 relief effort. At the end of August this year, the NLC reported back to parliament and provided a list of organisations that had received Covid-19 emergency funding. The name of the Hangwani Mulaudzi Foundation does not appear on this list.

Mafela confirmed, however, that the foundation had benefitted from the emergency funding. “At the time when the NLC made a submission to Parliament, the application for the said foundation was not yet finalised. The allocation for Covid-19 relief for food parcels was finalised post submission to parliament,” he said. 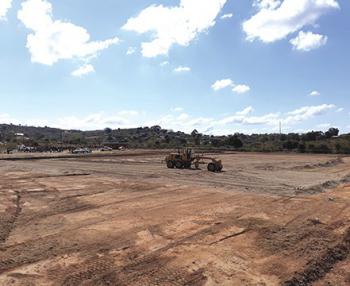 In June this year, when Limpopo Mirror visited the site at Mukondeni village, work had just commenced.