An 18-year-old artist from Dopeni village in Nzhelele, Thendo Makatu, stepped into the limelight the moment he produced a portrait of a beautiful girl by the name of Shudufhadzo Musida. Now that Shudu has been crowned “queen of the land”, he is constantly excited and celebrating.

“I drew the portrait to show my admiration for the beauty queen, who happened to be the only finalist representing Limpopo in the competition then,” he said. “When I shared the image around via social media, I had more and more people contacting me to do their portraits.”

Thendo said that he drew Shudu because he had seen in her a strong young woman who had the willpower to realise her dreams and achieve more in life. “She’s the epitome of youthful success, for she works hard, and she believes in herself,” he said.

Thendo started drawing in 2010, scribbling cartoons in his schoolbooks. When he realised that this was something he enjoyed doing, he started focusing more on his craft, refining his skills. “I realised that the artwork did not turn out bad at all,” he said. “It dawned on me that art was my passion.”

Through the years, for Thendo, art had become a means of escaping from the banality that comes with idleness. “When I went through hard times, I managed to emerge unharmed because of art,” he said. “When I feel heartbroken or unhappy, I find strength and meaning in my pencils and papers.”

Thendo specialises in human portraits, but he does not limit his horizons. “Just tell me what you want me to draw for you and I will do it,” he said. 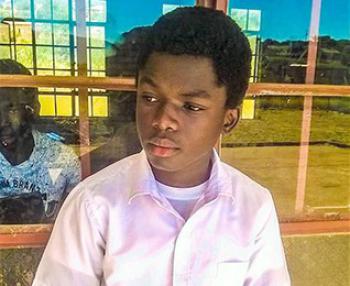 A portrait of Shane Eagle, a South African rapper.