Granny Madzhiga and her four grandchildren in need of shelter

When Musanda Vho-David Murudi recently visited a physically challenged resident, Ms Joyce Madzhiga, he felt tears stinging his eyes after seeing her crawl to fetch wood to make fire, so she could prepare food for her four orphaned grandchildren.

“I received a touching report about Vho-Joyce Madzhiga and decided to stand up and come to see the nature of the challenges she was facing,” he said.

However, upon his arrival, Musanda Vho-Murudi discovered that Madzhiga’s painful living conditions were exacerbated by the fact that she had no proper shelter at Ramauba village in Ha-Masia. She is currently living in a one-room house with her grandchildren, who are aged between 5 and 15. Madzhiga can neither stand nor walk, and she can only crawl to get to the next point or space around the yard.

“We cannot declare ourselves good citizens if we do not take care of the socially vulnerable families,” he said. “The room she is living in is so tiny and dilapidated already.”

Madzhiga said that the mother of the four children had died three years ago. “I am also struggling myself, so I am in no position to save money to build a proper house for myself and these poor children of God,” she said.

Musanda Vho-Murudi learned that no social worker had ever visited this family for moral support. In addition, no toilet is visible in the yard. “It remains a mystery how the crawling old woman, without an ordinary wheelchair, helps herself in this situation,” he said.

In a nutshell, the family seem to be headed by a 15-year-old girl who is in Grade 10. She also takes care of her three young brothers. “We are unable to fully focus on schoolwork due to our dire situation,” she said. “We don’t have a full school uniform.”

However, communication and marketing manager of SASSA Zwannda Kutama said that the orphans or their guardian should visit the office of the local social worker. The social worker will then prepare a report for foster children to be enforced by the court, which will enable them to benefit from a foster-care grant.

Meanwhile, Musanda Vho-Murudi is appealing to fellow citizens to step forward and assist the lady and the four children who need help. Those who wish to help can call 082-7245929 or 081-4704723. 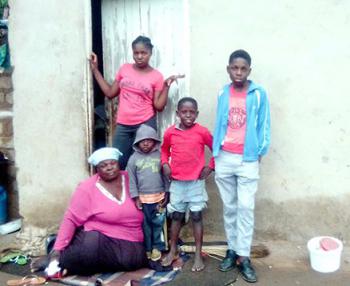 Vho-Joyce Madzhiga and the four children she is taking care of.