A 23-year-old man accused of killing a police officer while escaping from custody appeared in the Mutale Magistrate’s Court on Monday.

Muvhuso Morgan Nyadzani, who is facing charges of murder, rape, escape from lawful custody and robbery, appeared in court alongside his uncle, Azwihangwisi Nethengwe (36). Nethengwe is faced with charges of defeating the ends of justice.

According to Limpopo police spokesperson Brig Motlafela Mojapelo, Nyadzani was out on bail for car hijacking in January this year before he was arrested and placed in police custody again earlier on the day of 27 November on charges of rape, kidnapping and violation of a protection order.

W/O Mbulaheni Ronald Mulanduli (57) was conducting his routine visit at Mutale Police Station's cells later that day when he was attacked by Nyadzani and allegedly stabbed several times with an unknown object. Nyadzani then took the keys from Mulanduli’s pocket and stole an undisclosed amount of money from a safe before making his escape.

Nyadzani’s uncle, Nethengwe, allegedly rushed him to a traditional healer at one of the local villages for muti “to help make his murder case disappear”. After a team of investigators received information on their whereabouts, they followed up on it and both men were seized and arrested on Sunday morning.

According to Mojapelo, the alleged murder weapon, keys and some of the money that was stolen were found. An internal investigation is being conducted to determine whether Nyadzani was thoroughly searched before entering the police cells, as per standard law-enforcement procedures.

The spokesperson for the Directorate of Public Prosecution in Limpopo, Ms Mashudu Malabi-Dzhangi, said both suspects’ cases had been postponed until 15 March 2021 for further police investigation and both accused would remain in custody.

The Provincial Commissioner of Police in Limpopo, Lt Gen Nneke Ledwaba, has welcomed the arrest of Nyadzani and Nethengwe. They were caught within 72 hours of the killing and escape from custody.

Family spokesperson and younger sister of Mulanduli Ms Nthambeleni Mulanduli was still devastated about the news of the murder of her brother when speaking to Limpopo Mirror. She said that he used to take care of the family, who were all still in great mourning over his death.

Mulanduli, who was from Tshandama village in Mutale, will be buried on Saturday, 5 December. At the time of our going to press, no clarity existed whether his funeral would be official or not. 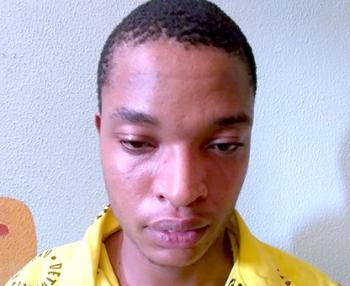 Muvhuso Morgan Nyadzani (23) is faced with the murder of  W/O Mmbulaheni Mulanduli from the Mutale Police Station. Photo supplied by Mutale Police Communication Section.

W/O Mmbulaheni Mulanduli (57) from the Mutale police was killed by a suspect who was in custody on Fiday, 27 November. Photo from the family album.