The massive surge in Covid-19 infections and deaths in South Africa came as a harsh reminder that playtime is over regarding keeping yourself and those around you safe from the virus. Nationally, a shortage of beds for the critically sick is experienced, with a similar situation unfolding at a local level.

The Zoutpansberger spoke to the hospital manager of the Zoutpansberg Private Hospital in Louis Trichardt, Ms Anneke Stroebel, on Tuesday and the picture she painted of the situation was a bleak one.

Stroebel said that they had seen a sudden increase in Covid-19 infection and deaths since Christmas. She contributed this increase to a couple of factors. “Not only is it a new variant of the virus, but it hit over the festive season, which sees a tremendous increase in cross-border travel, both provincially and to our neighbouring countries. Add to this the fact that many people suffer from Covid-19 fatigue [the tendency to get tired of wearing a mask, washing hands regularly and not maintaining social distancing], it was a recipe for disaster – a perfect storm that hit Limpopo hard,” said Stroebel.

Since Monday, the Ampath laboratory situated next to the private hospital tested between 100 and 160 people per day for the virus and long queues were visible. “These are mostly people who were referred to the laboratory by their physicians. Some came of their own free will,” said Stroebel. A similar situation was experienced at the other private laboratory, Lancet, in town. “Unfortunately, we do not know how the local government hospitals and testing stations are coping,” said Stroebel.

Stroebel warned that the new variant of the Covid-19 virus is extremely contagious and remains as deadly. “From 24 December, with the exception of only two days, we had one or more fatality daily, going up to as high as four in a 24-hour period.”

With the number of positive tests showing a dramatic increase, the private hospital’s resources are stretched. Stroebel said, however, that despite the crisis, they were prepared and were coping. “On 24 December at 12:00, we decided to increase our ten-bed isolation ward to 16. This includes two casualty beds. On 28 December, we added another four beds to the ward. This means that, at present, two thirds of the hospital beds are allocated to the Covid-19 isolation ward,” said Stroebel.

According to Stroebel, their Covid-19 isolation ward remains almost completely full. “But it fluctuates a lot. As some patients are discharged, others are admitted,” said Stroebel. Outside the hospital at one stage, ambulances and some patients were waiting in their cars to be admitted – fortunately, that situation has improved.

Stroebel said that the problem they were experiencing was, however, the availability of beds for critically sick patients at tertiary hospitals who needed high care or intensive care. “We have two to three critically sick patients daily, but as we do not have a high-care or intensive-care unit, we need to transfer these patients. As we speak, the Limpopo Medic Clinic, Netcare Phuluso Hospital in Polokwane and Tzaneen Mediclinic have no general, HC or ICU beds available. Traditionally, we transfer our critically sick patients to these hospitals. So, we have to look elsewhere to send the patient, find a receiving specialist, an ICU/HC bed, and an advanced life support (ALS) ambulance…” said Stroebel.

She continued by saying that, for this reason, they had reached out to the NHN (National Hospital Network) with which the Zoutpansberg Private Hospital is affiliated. “The NHN helps us to find beds for the critically sick. Our nursing manager, RN Dalene Gibson-Steyn, spends up to three hours at a time on the phone, trying to find beds at other hospitals,” said Stroebel.

Sadly, the shortage of HC or ICU beds means that not everybody in need of critical medical attention can be helped in time. At this stage, Stroebel said, they are transferring their critically sick mostly to the Lenmed hospital in Randfontein … if they have a bed available.

“I wish those people who still believe this whole Covid-19 pandemic is a hoax can come and experience for themselves the fight for survival, the sensation of suffocating and the fear of dying from the virus these patients experience. We would like to convey our condolences to all those families who have lost a loved one, whether here or somewhere else. Each death affects us all in some way. Despite this, we remain committed to treat every patient, whether there is a cure or not, to the best of our ability and support the families of critically ill patients,” said Stroebel. She said that the fatalities suffered the past few weeks were taking their toll on hospital and medical staff, but they were supporting them as best they could.

Stroebel pleaded with the public to adhere to the lockdown regulations, the basics being to wear a mask, wash your hands regularly and keep a social distance. “Don’t just follow the rules when the police are looking, follow the rules everywhere you go, even around the braai or dining room table. The small things are what count. Now is the time for every person to take responsibility for themselves. The biggest threat at this stage is the fact that people underestimate what impact their actions will have on the next person. Do not allow that your actions today will result in somebody’s dying or ending up in ICU in two weeks’ time. It is really sad to see how blasé many people are regarding the pandemic,” said Stroebel. 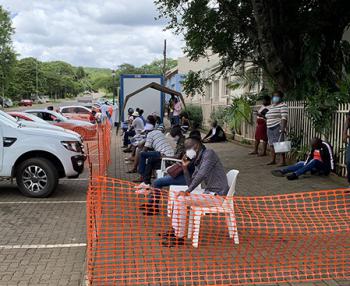 Since Monday, the Ampath laboratory situated next to the private hospital tested between 100 and 160 people per day for the virus and long queues were visible.