Despite the warning signs, thousands of people still threw caution to the wind and invested with Mirror Trading International (MTI), a company now in provisional liquidation and whose CEO has fled the country. Closer to home, speculation is that local investors could have lost in the region of R7 million in what is now described as just another Ponzi scheme.

“But it could be much more, because people are reluctant to talk about their stupidity,” remarked one Louis Trichardt-based financial advisor.

However, the scheme soon began to attract attention from the authorities. This included the Financial Sector Conduct Authority (FSCA), who decided to investigate. As their investigation neared completion at the end of 2020, they issued a media statement, once again warning the public not to trade with MTI. This followed a previous warning by them on 28 October last year to “exercise extreme caution” when “investing” with any person or organisation not registered as a financial service provider or in terms of a properly executed prospectus registered with the CIPC or registered as a financial institution with the Prudential Authority.

“The FSCA now reports that its investigation into this entity is near completion as MTI is not licenced to conduct financial services and has not applied for such a licence. The authority believes that MTI and its senior management are conducting an illegal operation, misleading clients and have contravened several laws,” reads the FSCA’s media statement on 17 December.

The statement goes on to explain at length the circumstances that led to MTI’s ultimate demise. Apart from Steynberg, the FSCA’s investigation highlighted two other individuals, Mr Clynton Hugh Marks and Mrs Cheri Marks, as assisting Steynberg in the management of MTI.

The FSCA states that Steynberg testified under oath that, from April 2019 to July 2019, members’ trading accounts were linked to a professional trader appointed by MTI through a multi-account manager arrangement linked to Meta Trader 4 and that trading was conducted in derivative instruments based on forex pairs. “However, according to Steynberg, MTI experienced substantial losses (of up to 80%), and as a result, MTI requested its members to delink their respective FXChoice accounts from the multi-account manager account and move their bitcoin to a pooled account,” says the FSCA.

As a result, Steynberg claimed, that from August 2019 MTI employed a bot (high-frequency artificial intelligence trading) together with a head trader and trading team to make all its trading decisions, with great success. The FSCA, however, found evidence contradicting this assertion. “During October 2020, after the FSCA informed MTI that it was conducting illegal unregistered financial services business, MTI claimed that it changed its trading activities to trade in derivative instruments based on crypto currency (Bitcoin), so that it no longer fell within the jurisdiction of the FSCA, and that it no longer required an FSP licence (financial services provider licence). This is also incorrect as the submissions received from Steynberg revealed that the crypto was alleged to be traded in the form of a derivative product, which would have required registration with the FSCA as well. We have found no evidence that any crypto trading is being conducted as communicated with members of MTI,” says the FSCA.

MTI, Steynberg, and Cheri Marks claim that the trading activities of MTI were from FXC to Trade300, transferring all the clients’ crypto assets from FXChoice to Trade300. According to Steynberg, Trade300 is another on-line trading platform. At Trade300, MTI experienced the same extraordinary profits while utilising the bot – but through trading in crypto derivatives at this stage. Steynberg also stated under oath and repeatedly in the press that the bot trading averaged a return of 10% per month, and that MTI had never had a negative profit trading day, but for one exception. Marks also repeatedly confirmed the trading successes on social media.

“The FSCA obtained evidence from FXChoice, a Belize registered on-line trading platform, that is in complete contradiction with the claims of Steynberg and Marks. According to FXChoice they received queries from clients of MTI and in the process the clients provided FXChoice with trading statements. The source of the trading statements was MTI. These trading statements were based on demo trading accounts and not actual trades. As a result, FXChoice froze the balance of the crypto assets linked to MTI on the FXChoice platform.

“However, the total frozen crypto assets on FXChoice is a negligible amount, taking into account the total assets that MTI claimed it invested on behalf of its clients. FXChoice confirmed that MTI put in 1846.72 Bitcoin from 29 January 2020 until 3 June 2020 and made a loss of 566.68 Bitcoin, an approximate capital loss of 30%,” states the FSCA.

The FSCA attempted to track down Trade300 to obtain a statement and trading details from it, to verify the version of MTI. MTI did not provide any useful details that assisted the FSCA.

The FSCA followed all possible links on the Internet to establish whether Trade300 existed. It could only find one reference to Trade300, which was the website of Trade300. However, the website was and still is “under maintenance”, and the only reference linked to the website is the name of “Joe Steyn”, a known alias of Steynberg’s.

The FSCA obtained search and seizure warrants and executed them at the homes of Steynberg and Marks, and the offices of MTI. On the desktop computer of Steynberg, the investigation team found evidence relating to Trade300. Trade 300 therefore appears to be linked to Steynberg.

“As a further effort to verify the evidence of MTI, Steynberg and Marks, the FSCA requested information from MTI about the transfer of clients’ assets from FXChoice to Trade300. MTI, in support of its assertion, purported to provide proof of the transfer in the form of Bitcoin wallets, stating that MTI transferred 16 444 Bitcoin from FXChoice to Trade300 in 4 instalments on 21 July 2020; 22 July 2020 and 24 July 2020 respectively.

“The FSCA found that no withdrawal of bitcoin by MTI from FXChoice occurred in July 2020. The last withdrawal of bitcoin by MTI from FXChoice was conducted in August 2019. Further, FX Choice confirmed that none of the eight sending wallets are related to FXChoice and that FXChoice had neither received deposits from nor sent any payments to any of the eight bitcoin wallets,” states the FSCA.

According to the FSCA, the transfers were made from wallets with transaction activities that bear no resemblance to the purported activities of MTI. “We have found no evidence of any significant store of Crypto assets on any trading platform and that most crypto balances appear in the name and under control of Steynberg. The amount of such balances is well below the advertised balance on the MTI trading platform as being due to investors of MTI,” states the FSCA.

The final death knell for MTI, however, sounded when they were placed in provisional liquidation on 29 December by the Western Cape High Court after failing to pay out members requesting withdrawals. MTI reportedly scammed well over 280 000 members out of their hard-earned money, totalling 27 000 Bitcoins, worth roughly R9.3 Billion. 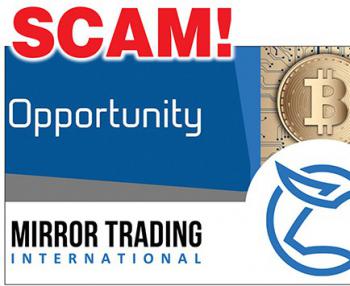