A group of residents who were moved to make way for the construction of the Nandoni Dam in Limpopo say they are unhappy with the compensation offered by the government.

Families from about 33 villages were moved when the Nandoni Dam was built in 1998. They have been fighting ever since for compensation. Villagers lost crop land and fruit orchards and 405 homesteads had to be relocated. Among the villages affected are Ha-Budeli, Ha-Mutoti and Mphego, Tshilungoma, Tshitomboni, Tshaulu, Dididi and Mulenzhe.

The families approached the Public Protector to demand compensation and she gave instructions for remedial action in 2006 and again in 2009. But the villagers’ complaints had not been addressed until Deputy Minister David Mahlobo stepped in to fast track the process in October 2020. Some of those who used to farm are now forced to live on social grants.

In December, the families finally received letters of compensation from the department, offering them sums of money for the land.

Alalali Ramovha is one of the villagers who lost her plot of land. Ramovha said she got her letter on 1 December and was offered R6 824,52. This amount was calculated according to evaluations done in 2001.

Ramovha said she refused to sign the letter, as she believed her loss amounted to more than the state was offering to pay her. “Based on what I used to benefit from the fruit and other crops I grew, I am running a loss from such a small amount. There is no fairness in that amount. All my dreams of building myself a better home have been shattered by the department,” said Ramovha. She is considering challenging the department’s offer.

Some villagers have apparently accepted the offers, signed, and been paid. But Solomon Baloyi, one of the leaders of the Nandoni Complaints Resolution Committee, questioned the validity of the electronic signatures of the beneficiaries. He said the committee was not aware of anyone who had access to signing electronically.

Baloyi was also upset that the department had not gone through the committee as had apparently been agreed. “Our agreement is that all offer letters have to come through Nandoni Complaints Resolution Committee,” said Baloyi.

In response to Ramovha’s complaint, the department told GroundUp that the amounts offered to the beneficiaries were fair and were based on valuations of the land at the time and on what the plot was being used for.

Sputnik Ratau from the department said complaints would only be attended to after all those who had accepted had received their payments. He could not say how many had done so. “Payments are processed for those whose verification has been completed,” he said. 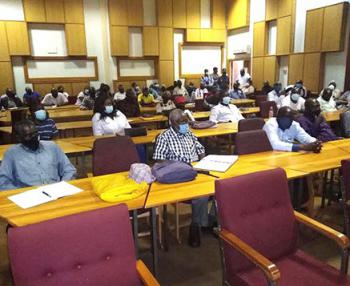 Villagers who were displaced by the construction of the Nandoni Dam have been waiting 22 years to be compensated. Some of them finally received their offers from the Department of Water and Sanitation but say the offers are too low to cover what they lost. Archive photo: Bernard Chiguvare.