Another mob justice incident at Mhinga

The police have condemned what appears to be yet another mob attack that happened on Tuesday at Mhinga village in the Saselamani police precinct. Two people were injured and a vehicle, house and spaza shop were set alight.

According to the police’s provincial spokesperson, Colonel Moatshe Ngoepe, residents from Maphophe village had allegedly grouped together because a killing had taken place previously at the village, and the residents blamed the incident on suspects staying in the neighbouring Mhinga village.

Ngoepe said that a group of community members then marched from Maphophe village to locate the suspects in Mhinga village. “The police were notified, reacted swiftly and, on arrival, they found that the mob had already caught the victims, assaulted them and subsequently burned these properties. The police managed to rescue the victims from the mob, and they were taken to the hospital for medical treatment with serious injuries,” he said.

Cases of public violence, attempted murder, malicious damage to property, assault and arson were opened at the police station. “The suspects involved in these incidents are still unknown and there is no arrest,” said Ngoepe.

The police are requesting anyone with information that can lead to the arrest of the suspects to contact Captain Edward Maluleke on 084 318 7877 or the crime stop number 0860010111 or the nearest police station.

The provincial commissioner of the SAPS in Limpopo, Lieutenant General Nneke Ledwaba, condemned the incident and reiterated that lawlessness and disrespect for the rule of law could not be condoned. He urged members of the public to refrain from taking the law into their own hands, but rather to report all suspected criminal activities to the police.

“Those who are still perpetrating this type of incident will be dealt with harshly and without compromise,” said General Ledwaba. 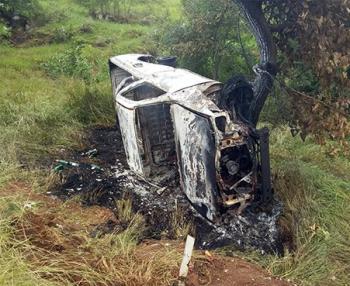 A vehicle was destroyed during the mob attack at Mhinga. Photo: Limpopo SAPS.