A cable thief got a bit more than he had bargained for when he was caught red-handed by a dedicated municipal employee. The thief is now contemplating his evil actions in prison.

A superintendent in the Musina municipality’s electricity department, Mr Lawrence Ramukanda, explained that he had received a call that an interruption in the electricity supply in one part of Musina Town had occurred.

Ramukanda said he rushed there to investigate what might have caused the power cut. “I did not waste any time. I immediately got into my work vehicle and drove there. When I arrived there, I realised that cables have been stolen and there were fresh footprints leading to the nearby bushes.”

He said he decided to follow the footprints in a bid to locate where the cable thief might have gone. “There was a risk that I might be injured or killed, because I didn’t know how many people I was running after. Noting that cable theft has been a big problem in our municipality, I gathered enough courage and followed the footprints into the bush. I couldn’t believe my eyes when I immediately spotted one male cable thief sorting the cables behind a thorny shrub. When he saw me, he left the cables on the ground and ran away.”

Ramukanda said he decided to give chase and followed the man at high speed. “Although he was also running at high speed, I managed to increase my speed and catch him. He tried to resist, but I pulled him to my work vehicle and handcuffed him. I then called the police, who came and arrested him. I am happy that I have managed to bring change in this area where cable theft has become a problem. I believe it will serve as a lesson to other cable thieves that we will also catch them and hand them over to the police.”

Musina’s municipal manager, Mr Nathi Tshiwanammbi, commended Ramukanda for his bravery. “What he has displayed is true dedication to his work. He went an extra mile to risk his life in order to protect the infrastructure of the municipality. We really thank him for displaying love of his work and his dedication to service delivery.” 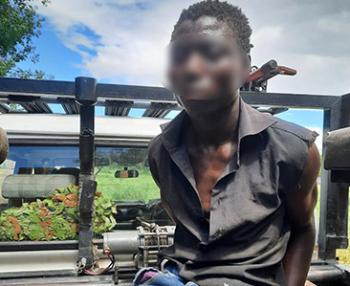 The cable thief who was caught red-handed by municipal employee. Photo supplied.