Angry residents of Maebane in Kutama wreaked havoc on Saturday (28th), taking the law into their own hands in an apparent revenge attack on a murder suspect’s family.

Two houses, belonging to the mother and grandmother of the suspect accused of the murder of Baldwin Mugwili (36), were set alight by an angry mob. The attackers apparently felt that they could not even stand having the suspect’s family live among them.

Mugwili, a security guard from Maebane, reportedly came off duty on the night of 22 February and met the suspect, Thompho Ngwana (28). A fight allegedly ensued and Mugwili was seriously injured. He was later taken to hospital with stab wounds in the neck. Mugwili was released from hospital two days later but died from his injuries at his home on 18 March.

Ngwana was arrested on Sunday, 21 March, and initially charged with attempted murder. However, according to the police, the charge was changed to murder after Mugwili died. Ngwana appeared in the Tshilwavhusiku Magistrate’s Court on Tuesday, 23 March, and was denied bail. The case was postponed to 30 April for a formal bail application.

An anonymous eyewitness told this paper that a crowd, carrying sticks and stones, walked to the home of Ngwana’s mother, Ms Christina Mashamba, and started breaking windows before setting the five-room house alight.

“We are tired of these senseless killings. We begged the family of the suspect to leave our village or face the consequences, but they decided otherwise. They deserve what they got. People are angry and it is only luck that no one was killed during the two incidents,” he said.

Mashamba was terribly upset about the actions of the mob and said that no need existed to set her property alight. She said that the people involved knew that the house belonged to her, and not to whomever they considered to be the suspect.

“We had lost everything in the fire, and by everything, I mean that I and the other family members are left with only the clothes on our backs. Everything inside the house was burnt to ashes. Clothes, beds, blankets, the stove, fridge, all the furniture and a car. All destroyed,” she said.

The roof and walls of the house were also badly damaged. According to Mashamba, the damage to her property is estimated to be more than R600 000. The grandmother, Marara Mashamba, also suffered great loss when her house was torched.

Thovhele Vho-Vele Kutama called for calm in the village and requested community members who might have information regarding the case to contact the police.

The police again appealed to members of the community not to take the law into their own hands. He said that the police must be allowed to do their job without any interference from the community. At the time of our going to press, no one had been arrested yet in connection with the incident. 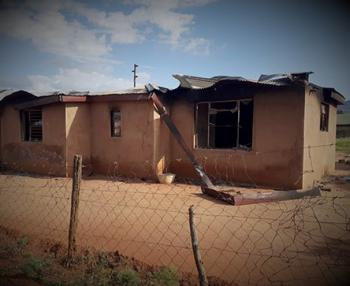 The house of Christina Mashamba, the mother of Thompho Ngwana, who is standing trial for the murder of Baldwin Mugwili, was set alight by an angry mob in Maebane. She and her family lost everything in the fire.