Skoonplaas mother braves smoke and fire to rescue her daughter

Residents from the Skoonplaas neighbourhood in Musina showed their spirit of ubuntu, or working together, after a family’s house caught fire last week. Neighbours showed up in great numbers to help in any way they could.

After the fire was put out, some even helped the family to clean the house.

Cassey Sibanda’s house is situated a few metres from Musina mall. Her brother, Peter Jack Mokgoli, and his six-year-old boy live with Sibanda and her nine-year-old daughter.

She told Limpopo Mirror that she did not know what had caused the fire, as she and the two children had still been sleeping at around 08:00 on the morning of Wednesday, 24 March, when they realized that the house was on fire.

“My brother had already left for work, so it was only me and the children in the house, asleep. When the boy come out of the bathroom, he noticed sparks coming out of the main electricity box and he alerted me. All I could do was to call neighbours for help. Later on, I realised that my daughter was still in bed,” said Sibanda.

The house was filled with smoke and flames and neighbours were trying to put the fire out with buckets of water. Sibanda feared that her child was going to suffocate. She broke windows to try to get into the house, but she could not get in this way. So, she ran through the front door into the house and whisked her child to safety.

The fire brigade responded promptly and put the fire out.

Sibanda was born and grew up in this house, which her parents own, and said that this was the first time in her whole life that something like this had happened there.

They have lost furniture, clothes, school uniforms, books, food, an undisclosed amount of money and identity documents. Limpopo Mirror visited the house a day after the fire. Most of the windows were broken. Burnt furniture was lying outside. An aunt who lives nearby is accommodating the family for now.

Mokgoli, who is the breadwinner, said that he had even lost his matric certificate. He pleads with business owners for assistance, so that he can restart his life. “The little money I earn is not even enough to sustain myself and the family, let alone to renovate the house,” he said.

Sibanda expressed her appreciation to the Musina residents who helped them in their hour of need. “I really thank everyone for their prompt action. Besides putting out the fire, some residents went on to clear the rooms and clean the walls,” she said gratefully.

Musina municipality promised to assist with food parcels and to replace the electricity box, while many residents are donating money to assist the family. Sibanda and her family said that they could not thank them enough for all their help and support. 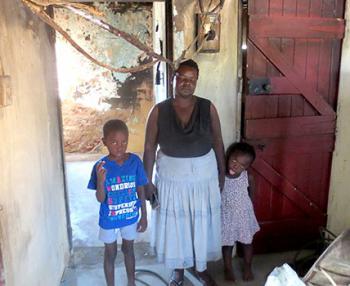 Cassey Sibanda and the two children escaped a fire at their house. The six-year-old boy in blue was the first to notice the fire and alert Sibanda.