Mutshidzi Musekwa (23) has turned her passion for cooking into a profession, which provides quite well for her. Today she runs her own eatery, called Blissful Eats with Kim. She is a professional chef whose dishes lure her customers back for more, time and time again.

Mutshidzi is a resident at Biaba Mountain View in the Nzhelele area. Her love of cooking began when she was very young and stems from her familial chores as a woman.

“It was something that was drummed into me. ‘You are a girl, so you are supposed to cook’, I was told,” she said. “While that may sound like prejudice along the gender lines, for me it has served a much worthier purpose. It was sort of a life-skill lesson, where I learned and fell in love with cooking. Soon I realised that I could play around with food and leave people happier and satisfied with my dishes.”

Her parents were not initially supportive of her passion when she had told them that she wanted to pursue cooking at college. But she did not let their displeasure dissuade her. “I didn’t take it as though they were trying to prevent me from achieving my goals,” she said. “People just don’t understand what it’s like to be a chef. Owning this title is the biggest thing that has ever happened to me. I walk around with pride, knowing who I am.”

Mutshidzi initially enrolled for a financial management course upon completing her matric but, after realising that the course was not for her, she switched to culinary arts with the International Hotel School.

“I did my practical at a five-star hotel in Sandton, where I acquired more skills on how to manage a kitchen and customers, as well as how to be creative with presenting a dish on a plate,” she said.

She remembers that several women had tried to discourage her along the way, telling her that culinary studies had no value and that she should give them up. “But I never let anyone discourage me because I knew what I wanted,” she said. “It saddened me because people who were telling me all that negative stuff were mostly women. I fail to understand the reason why women like to bring one another down.”

She said that studying to be a chef had never been an easy thing. “To start with, the tuition is very expensive. But I was lucky enough because I have always had a strong support system in my family,” she said. “The industry is tough. It’s not for people who crumble the moment they are pressured. There are crazy hours involved, you work on your feet all day long and get shouted at by head chefs because the service is too slow. Imagine all that trauma! But I made it, regardless.”

Now - and this gives joy to her heart - she has opened her own establishment. She does private dinners, bakes platters, caters for small groups and does menu planning. “We have recently produced our own range of sauces that make our dishes even more delicious,” she said. “The reason behind my sauces was to make something different, something that everyone has been waiting for, but did not know where to get it.”

Mutshidzi would like to see other young people aspire to and live out their full potential. She says that today’s young must pull up their socks in whatever field they find themselves practicing in. “I come from an underprivileged area,” she said. “I want to set a good example for my peers, so they don’t limit themselves. Where one comes from shouldn’t determine one’s future. It only takes determination and passion to achieve what you desire in life. It all starts with you.” 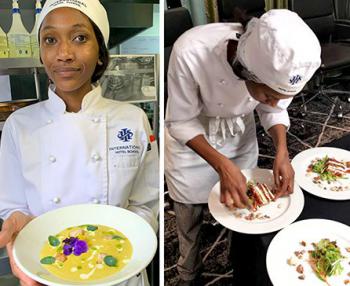 Mutshidzi Musekwa has turned her passion for cooking into a profession.