Khodani does not shy away from challenges

Khodani Nyelisani (26) of Muledane in Thohoyandou does not shy away from challenges, and nothing shows this better than her career choice of being a full-time biokineticist.

Her career choice might sound new and uncommon to many people who are not exposed to sports, but Khodani assures her fellow youths that biokinetics is nothing new or strange.

Khodani, who obtained her Bachelor of Science degree in Biokinetics from the University of Venda, said that young people were often discouraged from studying biokinetics. “It is worse when you are a woman,” she said. “They will drill fear into your skull, so that you end up going for an alternative course or programme at varsity.”

She said that most people unfortunately tended to look down on a course in biokinetics, without doing research on it first. “We are discouraged when we are still at school, where we are told that it doesn't have many job opportunities,” she said. “After graduating, other students started new degrees. No-one even bothered to first look into this field and see if it were possible to make a career from it. As in most cases in life, we have to fight misconceptions. Only then can we call ourselves winners.”

Upon graduating, Khodani had to spend a year at home, after which she volunteered at Tshakhuma tsha Madzivhandila FC (TTM). The soccer team management realised the value of her work in the team as a biokineticist and registered her for a full-time position with them.

Biokinetics is a broad degree that focuses on many aspects, and Khodani’s focus was physical fitness at TTM. “It opened doors for me because I’m currently working as a fitness trainer at Venda Football Academy, which is campaigning in the ABC Motsepe League,” she said. “I am currently in the process of opening my own biokinetics centre in Thohoyandou. I have given myself a period of five years to find a steady position at a top-flight league. By then, my practice should be known all over the country.”

Once she has set up her practice, Khodani’s focus will be on helping people with chronic diseases, injury rehabilitation and fitness. “I would encourage young black girls to consider this career because we have few black women working as independent biokineticists,” she said. “My goal is to make this career popular in rural areas and also mentor other young people who are interested in pursuing this career.” 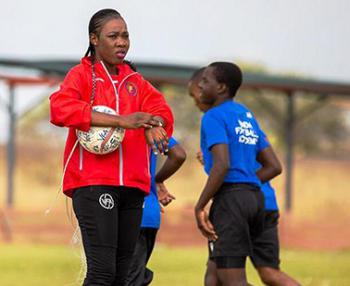