“If I die now, I will die a happy man because I have been recognized by my own African people, and my works will be known throughout the world,” said well-known mbila musician Mr Jutas Kanakana Mathoho (83) of Tshiombo village, outside Thohoyandou.

This comes after Ndalama Heritage Consulting, in association with Mikosi Media, FundiCiti and the National Film and Video Foundation, commissioned a documentary on the interesting life story of the prolific Tshivenda traditional music master who is commonly known as Vhavenda Vho-JK Mathoho.

This documentary is the brainchild of three creative people, Dolphin Mabale (an anthropology lecturer at the University of Venda and the executive producer), Thivhilaeli Makatu (former South African diplomat and producer) and Mmbangiseni Ravele (photo-videographer and director of photography). As part of skills empowerment, the trio employs 10 young, committed people to assist with all aspects of the production, from camera, light and sound to managing the whole project.

This 45-minute production starts at OR Tambo International Airport, with the arrival of the interviewer and his journey from Gauteng, until he reaches Tshiombo village where he engages Vhavenda Vho-JK Mathoho. The production team uses the spectacular Venda landscapes as a canvas to paint the beautiful life story of Mathoho and his mbila. Besides interviews at the home of Mathoho, the film is shot at Songozwi, Lake Fundudzi, Dzata Ruins, Thathe Holy Forest, Tshatshingo Potholes, Mapungubwe and Thulamela Ruins in the Pafuri area.

The producer of the documentary, Thivhilaeli Makatu, said Vhavenda Vho-JK Mathoho was one of the most gifted traditional music instrument players in the country. “His exceptional talent cannot be ignored, and we want the world to know about it.”

He said the documentary would have English subtitles, leaving room for translation into other world languages, as they planned to take this production throughout the world. When asked what the final film's prospects were here at home and abroad, he said: “We promise to deliver a quality product and take the mbila to its former glory as the musical instrument of the gods. When history is written, JK Mathoho's name will be etched in our collective memory, in South Africa and worldwide, to live to eternity.” 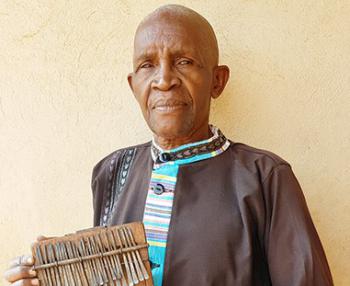