Lesley Manyathela stadium gets renovated after years of neglect

Residents are delighted to see that the revamping of the Lesley Manyathela stadium in Musina is finally under way again, following years of neglect.

Last year, Limpopo Mirror did a story on Gladys Manyathela, mother of the late Lesley Manyathela, who pleaded with Musina Municipality to remove the Manyathela name from the stadium, as they did not want to be associated with the stadium in any way while it remained in such a terrible condition. The grounds were unmaintained and in a sorry state, and the ablution facilities were a mess.

The stadium was named in honour of her son, who was a prolific former soccer player for Orlando Pirates around 2000 but died in a car accident in 2003.

Gladys, in particular, is very happy about the latest renovations taking place. “I feel very relieved and appreciate seeing the stadium being renovated. I also would like to see more sporting facilities, like tennis courts and gyms built. This will provide more entertainment for the local community,” she said, adding that the stadium should have security on a permanent basis to protect it from vandalism.

According to Mr Wilson Dzebu, Musina Municipality’s spokesperson, the current revamping project at Lesley Manyathela stadium is financed by De Beers Venetia Mine as part of Musina Municipality’s social labour plan. They have put aside R1 million of this financial year’s budget for revamping the stadium, which includes repairing the grandstand, soccer pitch, combi courts, ablution facilities and changing rooms. They also intend paving the new access road, repairing the palisade fence and rebuilding the collapsed wall on the eastern side of the stadium. The project is scheduled to be completed within the next three months.

Mr Theodore Maoka, a member of the Musina Sports Council is not, however, very optimistic that the municipality will make it a priority to ensure that the stadium remains maintained after renovations this time, let alone implement full-time security. “Though it is very good of Musina Municipality to spend so much on revamping the Manyathela stadium yet again, they have never really maintained it in the past. The stadium had been renovated three times before - at great cost to the municipality. But every time, after going through all the trouble, they seemed to have forgotten about it while it just got vandalised again. They don’t really seem to take much care of the stadiums,” Maoko said. 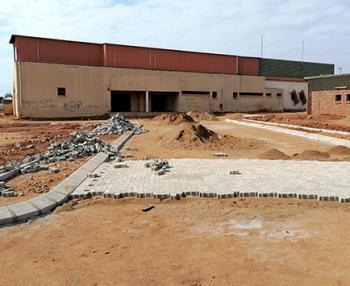 The Lesley Manyathela stadium in Musina is once again being renovated. Photo: Bernard Chiguvare.