Will the MM be fired?

A veil of secrecy seems to surround the fate of the municipal manager of the Thulamela Municipality, Mr Hlengani Maluleke. A disciplinary hearing was held last month, and a recommendation was made that he be suspended for his role in the VBS Mutual Bank saga. The council, however, seems to be unwilling to take such a drastic step.

Questions sent early this week to Thulamela Municipality’s spokesperson, Mr Ndwamato Tshiila, went unanswered. Tshiila was asked whether the council had convened to discuss the recommendations of the disciplinary committee. He responded telephonically, saying that they would not comment on the matter. When Tshiila was confronted about this seemingly unconstitutional conduct (by refusing the public information), he said that he had not yet been informed of any council decision on the matter. He did not deny that a council meeting had taken place to discuss the issue but said that he had no further information on the outcome. He confirmed that Mr Maluleke was not on suspension and that he was working as usual.

That the Maluleke matter has become a hot potato for the council is certain. He is one of the people caught in the aftermath of the VBS scandal for having approved the municipality’s R30 million investment in the now-liquidated bank. Thulamela Municipality, however, is one of the few Limpopo-based municipalities that did not lose money when the scams at the bank were exposed. Thulamela withdrew their investment and managed to collect interest of just over R682 000.

In July this year, Thulamela Mayor Mushoni Tshifhango was axed, following an instruction by the provincial executive committee (PEC) of the ANC in Limpopo. This was in line with a forensic report on the VBS matter that recommended action against all politicians and officials involved in the scandal. The report also fingered Thulamela’s Maluleke. The report did indicate that political pressure had been exerted on officials to invest with VBS bank.

A disciplinary hearing was eventually held on 26 July where Maluleke was charged with gross dishonesty, gross misconduct, or alternatively gross negligence. Prior to the hearing’s taking place, a plea agreement was concluded between the municipality and the municipal manager.

In spite of the plea agreement, in which Maluleke pleaded guilty to all seven charges, the hearing continued, with Maluleke opting to represent himself. As a mitigating factor, Maluleke was portrayed as having a clean record at the municipality and, under his leadership, Thulamela had received unqualified audit reports. He also indicated that he had approved the investment at VBS after political pressure had been exerted.

The plea agreement suggested that Maluleke receive a written warning, which will be kept on his file for a period of six months. This agreement, however, was not automatically accepted by the chairperson of the hearing. He pointed out that Maluleke had been aware that his actions were in contravention of legislation, and he had been warned about this.

The chairperson of the disciplinary committee had the difficult task of making a decision when the employer clearly did not seem in favour of a dismissal. He felt, however, that a recommendation that Maluleke be dismissed was the correct one.

The council’s unwillingness to act against the municipal manager did not go down well with other structures in the region. The convenor of the ANC Youth League’s Thulamela Sub-region, Mukhethwa Mulovhedzi, welcomed the outcome of the disciplinary hearing, but expressed their unhappiness about the lack of further action taken.

“It came to our attention that the mayor, together with the PMT (Political Management Team), are refusing to implement the outcomes of the report. As a youth structure, we are disturbed by the manner in which the matter is being handled. The leadership that is supposed to protect the municipality are exposing the municipality by setting a wrong precedent against the adherence to the financial management policies. It is our expectation that such senior management leadership are rumoured to have received bribes in the form of money to mute their voices about the issue of MM,” said Mulovhedzi.

He said that they would do all they could to make sure that Thulamela Municipality was free from corruption before the local government elections took place. Mulovhedzi said that the youth would be engaging lawyers to challenge the decision of the Thulamela council to ensure the implementation of the recommendations of the report.

“We are made to understand that [the] council intends to get a second opinion on the matter. For us, the issue of the second opinion is unacceptable, because that will be misusing funds, leading to wasteful and fruitless expenditure. We cannot begin to think of reasons leading to the rejection of the report when a lot of money has been spent to compile this report. The second opinion is out of sync!”

The spokesperson of the Vhembe ANC region, Tshifhiwa Dali, said that they had taken note of the disciplinary hearing’s report that was circulating. “We wish to reiterate that we shall never micromanage our deployees (sic) in Thulamela. We firmly believe that they have the capacity to deal with such a governance issue,” he said. 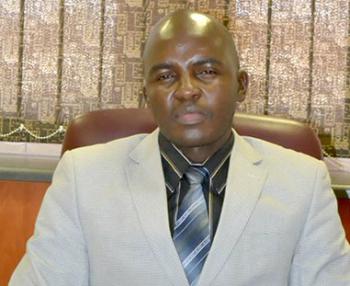 The municipal manager of the Thulamela Municipality, Mr Hlengani Maluleke.