Villagers opt to fix road and not wait in vain

More and more communities in the Vhembe area seem to be devising their own plans to address the poor condition of roads in their areas. On 16 September this year, the communities of Makwarani and Tsianda joined in this vision, opting to stop waiting for the government and take it upon themselves to improve the condition of the 3,2-kilometre main road leading to the villages.

For years residents complained about how difficult travelling to and from their homes was with the road being in the poor condition that it was, especially when it rained. Learners, educators, and people who travel long distances every day to get to school and work were sometimes delayed for hours because buses and taxis could not access the road.

Such was the state of the road that motorists had to dig deep into their pockets to maintain their vehicles. Only those with big bakkies were able to travel on the bumpy gravel road without getting stuck or damaging their vehicles.

Mr Darius Mankwe, a local taxi driver, lamented on the state of the road and told Limpopo Mirror that he had to change his vehicle’s tyres every six months because of the rocky condition of the road.

Ms Ester Sinyegwe, community leader of Makwarani, concurred that the road was so bad during the rainy seasons that getting around was a struggle for many people. “It was a real challenge for the bus to travel on that road. That is why we ended up saying that, as the municipality is failing to help us, we better not sit back but rather try to help ourselves.”

So, the residents formed a team to tackle matters concerning service delivery in their village, as the municipality and provincial government’s promises over the years to repair the road never came to fruition.

The last straw for these residents was when the Thulamela and Makhado Local Municipality apparently told them that their road was not on the priority list. Communities from this area are threatening to boycott the coming local elections.

They finished constructing cement tracks on the road on 26 September, and residents are very happy and satisfied about this improvement. The material, equipment used, and cost of labour were all paid for by the local community.

Attempts to contact the spokesperson of the Thulamela Municipality, Mr Nndwamato Tshiila, were unsuccessful and he did not respond to requests for comment. 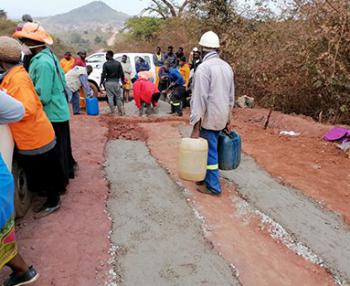 Residents have taken it upon themselves to improve the condition of the 3.2 kilometre main road that leads to Makwarani and Tsiandathe villages. Photo supplied.