The Limpopo Department of Basic Education commended educators who go beyond the call of duty to ensure that learners receive the best quality education.

Limpopo MEC for Education Polly Boshielo congratulated all the educators who represented the province and won awards at the 21st annual National Teaching Awards (NTA), hosted by the Minister of Basic Education on 6 October in Gauteng. The awards were first made in 2000 and aim to recognise, celebrate and acknowledge outstanding teachers.

Among the winners was Mr Shonisani Alfred Mafukaduvha of Mudimeli Secondary School in the Vhembe West District. Mafukaduvha won third place in the Excellence in Lifetime Achievement category.

This is not the first time Mafukaduvha has won an award in line with his profession. In 2019, he also won Eskom’s Entrepreneur/Teacher of the Year award.

Narrating how he manages to have an edge over other competitors, Mafukaduvha said, “After realising the plight of my community, I established the Alfred Mafukaduvha Foundation last year. The foundation, among others, offers extra lessons for learners in mathematics, science and English.”

Mafukaduvha is also an advisor for the Youth Entrepreneur Society (YES). YES encourages young people to be future job creators, instead of job seekers. He has been in the teaching field since 1990 and has played a big part in the success of Mudimeli Secondary school.

“In 2015, I approached the Limpopo Department of Education to replace the pit toilets at the school. The department replaced the toilets with Enviroloo ones, which are safer and more user friendly. In addition, the department delivered 10 fully furnished mobile classrooms,” he said.

Mafukaduvha believes that educators must be devoted to their work. Since 2011, his own dedication has resulted in a 100% pass rate for the school’s history students. “Being an educator is not simply getting a salary. No! Dedicate yourself to your work. Love the community you are working with, and be part of that community’s development,” he said. 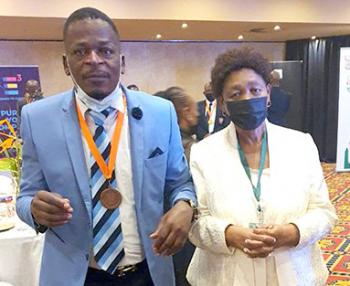