Motorists using the newly “revamped” D959 road between Louis Trichardt and AFB Makhado passing through Kutama and Sinthumule are appalled at the poor condition of the road after it was rehabilitated at a cost of R8 million. The road has started crumbling, with gaping potholes leaving serious question marks regarding the shoddy work delivered by the contractor.

On 7 December 2020, the Limpopo MEC for Public Works, Mr Dickson Masemola, set aside R11.5 million for upgrading the D959 and D3715 roads. The contractor, Makasana Construction, started work in February this year, but just more than three months into this six-month rehabilitation project, construction work ground to a halt in June this year. As motorists’ frustration mounted, the road was “unofficially” opened in August this year.

On 14 October this year, Masemola visited the area to promise a further R30 million for revamping the D3715 road. He also visited the D959 road to check on its condition.

Masemola was outraged to find that the D959 road’s condition had actually gone from bad to worse after the R8 million revamp, and that it would require further major rehabilitation. This rehabilitated road had, among other things, developed what is referred to as ‘crocodile skin’, which is cracks in the road around a pothole. These cracks usually indicate signs of a deeper underlying problem, such as water underneath the surface.

Residents of the area have raised serious concerns about the shoddy work delivered by Makasana Construction. “Who is now to blame for the poor condition of our newly ‘upgraded’ road?” they want to know.

Mr Edward Masala, the deputy chairperson of the Dzanani II Taxi Association, said that tyre punctures had become a common occurrence for taxi drivers on the road. “It is an unbearable situation. The road has the worst potholes. It is difficult to drive along this road and it delays our trips. With the completion of the road, the situation has gotten worse. Potholes and deteriorating road conditions create a serious danger for all road users and affects our business as well,” Masala said, pointing the finger at the government for not implementing plans to reconstruct the road properly.

The chairperson of the Sinthumule-Kutama Concern Group, Mr Elijah Liremi, said that the community felt insulted by the poor workmanship in the refurbishment of the D959 road. He said that the road seemed to be covered with soft oil, instead of being properly tarred. Liremi said that the contractor’s bank accounts should be frozen.

Last week, MEC Masemola publicly expressed his dismay about the poor state of the revamped road. “The contractor did shoddy work,” Masemola said, adding that he viewed the poor quality of the road in a serious light and had referred the matter to both the Special Investigating Unit (SIU) and the Directorate for Priority Crime Investigation (Hawks) to investigate. He said that the contractor would face dire consequences, should investigations find any dishonest dealings regarding the project.

As far as this newspaper could determine, Makasana Construction, in a joint venture with another company called Vashumi Construction, received a whopping R43 303 935.40 in 2019 from the Limpopo Department of Public Works for a “three-year household-based Routine Road Maintenance project at Makhado local municipality in Vhembe district”. Whether the D959 project formed part of this is unknown. What is also not known is whether Makasana Construction and Vashumi Construction are involved in the D3715 project for which Masemola had made a further R30 million available in October this year. 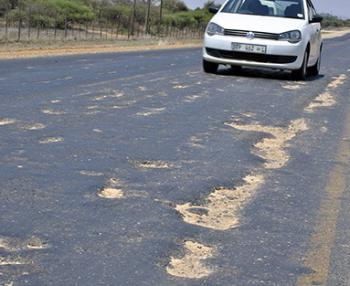